Our holiday letter comes to you from the island of Molokai where we are visiting for a few days over Christmas and where we just had a most memorable day. Harrison has a long interest in the history of the leprosy settlement at Kalaupapa on the north shore of Molokai. He has read many of the books written about it and we took the famous Molokai Mule Ride and tour of Kalaupapa way back in 1989. A few weeks ago we went to a book-signing event near our home for Henry Nalaielua, an 82-year-old resident of Kalaupapa on and off since 1941 who has written the best of the few patient-authored memoirs, No Footprints In The Sand. Henry is originally from the Big Island but was sent away in 1936 at age 10 because of the disease, so it was a homecoming of sorts and a very moving evening.

Shortly before we left for Molokai, Harrison found Henry’s name in the Molokai phone book and called him. Harrison said we had met him at the book signing, we would like to bring him some of Sharene’s to-die-for banana bread as a Christmas present, and we would hike down the Kalaupapa trail to give it to him. Henry only has one leg but he still drives, and he agreed to meet us at the end of the trail (visitors to Kalaupapa must be escorted). 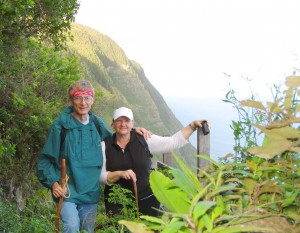 Kalaupapa is an isolated peninsula at the bottom of 1800-foot cliffs, accessible by land only from a 3.8-mile cliffside trail with 26 switchbacks. So this past Sunday morning we drove to the trailhead and started hiking down. There are no mule rides on Sunday so we had the entire trail to ourselves. It was a beautiful day for hiking, about 70 degrees with a few clouds and a light breeze, with a magnificent view of the peninsula and cliffs on the way down. We reached the bottom and met Henry driving his old red pickup truck. We didn’t know what to expect, but he told us to climb in the cab and proceeded to give us a personal 3-hour tour of the entire settlement and peninsula! He used to be the most popular guide for the commercial tour company, and although that was years ago he still knows more about the place than almost anyone. We remembered some of the sights from our 1989 tour, but Harrison has read a lot about Kalaupapa since then so many of the places meant a lot more to him. Sharene had prepared a lunch for the three of us, and then Henry drove us back to the trailhead and we said goodbye. 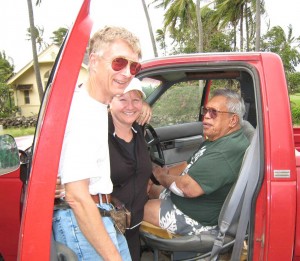 To know the experiences this man has had, to spend all this personal time with him, and to realize he won’t be around much longer (he is one of only about 25 patients remaining at Kalaupapa, all well over 60), was an extremely moving experience. As we made the longer hike back up the trail, we reflected on what a wonderful attitude he has and has shown throughout his life: accepting his situation and making the most of it by taking the opportunities available to him at the time. He is appropriately angry at some of the stupid and thoughtless things done to him and thousands of others because of ignorance about the disease, but he doesn’t let that control him and doesn’t blame the rest of the world for it. We feel very honored he would spend so much time with us and create such a memorable event at the end of a fairly uneventful year.

Home News: Oh, by the way, we moved! After 6 years in our beautiful oceanfront home, Hale Kakahi, we realized that we were using the house mainly as our offices, and that the highest and best use for the property was as a vacation rental. We weren’t ready to leave the area, so we moved to the house next door! Our new home is right before you get to the gate of Hale Kakahi, so now we are officially its gatekeepers! Nobody gets in or out of Hale Kakahi without us seeing them.

The new house is nice, and more functional in many ways, but we do miss Hale Kakahi’s unobstructed ocean views, the wonderful kitchen, and the big bedroom and bath. But our guests sure love Hale Kakahi so we feel good about sharing it. We’re at this new address for a while, but put it down in pencil, because it will change again in a year or two.

Visitors: Speaking of guests, we had several Hale Kakahi visits this year from family and friends. Harrison’s cousin Phil Lindner, his wife Joan, and their whole family including daughters, son-in-law and grandchildren assembled from around the world, marking Phil and Joan’s second trip to Hale Kakahi. Sharene’s cousin Brooks Van Holt and his wife Maria visited for a few days. John Nelson—client, friend and world-traveler—spent a few days with us in the spring. Our good friend Arica Reinhardt visited again. Arica gets the award for most visits of anybody and for being the most helpful guest—every time she visits she volunteers to work. This time she painted the hall bathroom! In the fall, Laurie Kilkelly, a friend from Harrison’s Seattle broadcasting days, couldn’t stay at Hale Kakahi because it was booked, but she relaxed for a few days in one of our other vacation rentals down the street. Then for Thanksgiving, Harrison’s former colleague from CellNet, Rocky Moy and his extended family, visited from the Bay Area and cooked us Thanksgiving dinner. Every guest should be so accommodating!

So even though we don’t have a guest room in the new house, we don’t want to discourage anyone from visiting because we now have a guest house! But give us lots of notice because it’s booking up fast. In fact, we’re having another benefit concert there this coming year and are hosting some musicians who are coming to perform on the Big Island in addition to our vacation renters and personal guests. 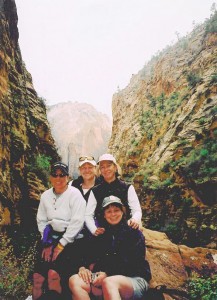 Travel News: The work year was busy but Sharene managed to get her annual girl’s trip in this past spring. Interestingly enough it included another big hike. (So that’s twice she worked up a sweat exercising in 2007!) She and her friends hiked 1500 feet up (and down) at Angels Landing in Zion National Park. Maybe not as emotionally moving as meeting Henry in Kalaupapa but very memorable all the same.

We also had a great trip to Vancouver this year. The same people who started the rumor that we moved to Hawaii to retire (ha!) apparently started a new rumor that we were moving to Canada. We did buy (and immediately resell) a condo there, but we have no plans to move… although it sure is a wonderful city, and through luck, timing and working with some very good people, the buying and selling experience was perfect in every way! 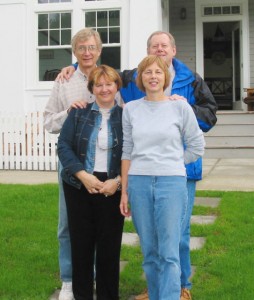 While we were in the Pacific Northwest, we spent a long weekend with really old friends Rick and Maggie Oldenburg on the Washington Coast at a new planned resort community, Seabrook. It was interesting to see what a resort community looks like in someplace other than Hawaii.

Business News: We have decided to sell the Big Island portion of our vacation rental business and are collaborating with another leading service in our area to sell our businesses together. We built Big Island Vacation Rentals into a decent business but it’s time to let it go so we can concentrate on Maui, our website businesses, other real estate investments, and maybe even slow down a little!

So now it’s on to 2008. We’re working on creating a life for ourselves where we don’t feel so tied to our businesses, one that allows us to travel a little more, maybe do a little more cliff-hiking, or maybe just take a weekend off work once in a while. We’ll let you know next year whether we’ve made any progress in that direction. In the meantime, we hope you all had a Mele Kalikimaka and best wishes for a Hau‘oli Makahiki Hou!