Kalaupapa Update: Our hike last Christmas to the leprosy settlement on Molokai and our visit with Henry Nalaielua generated the most response of any holiday letter we can remember. We thought you’d like to know that we kept in touch with Henry, and when we last heard from him a few months ago he was doing fine. We considered making a hike to Kalaupapa an annual tradition, but with all our other travel this year we thought we had better stay home this Christmas. 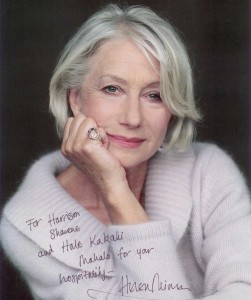 A Christmas Gift of Helen Mirren: Just when we thought we might have a more typical holiday, we got the most wonderful surprise. The production company for an upcoming film of Shakespeare’s The Tempest has been filming in Hawaii and we got a call asking if they could rent our former home, Hale Kakahi, for two cast members. The two cast members turned out to be the incredible Helen Mirren and her co-star, young, beautiful and gifted Felicity Jones! And by the way, could we prepare dinner for them on their first night at the house? Well, that was definitely an offer we couldn’t refuse!

At the appointed hour, we wait at Hale Kakahi as four imposing vehicles with tinted windows drive up. Out of one steps the star, who walks up to us with an outstretched hand and says, “Hi, I’m Helen,” as casual and unpretentious as could be. Felicity was still filming, so we showed Helen around the property and then everyone but Helen left for other appointments. Helen wanted to rest for a while and said she and Felicity would call us around 6 pm for dinner. We headed home where Sharene planned to do most of the cooking and got to work.

About 6:30 we finally get a call from Helen saying that Felicity is delayed but she’s hungry so could we come right over? We hop in the car with the dinner preparations and drive over to Hale Kakahi. Helen sits down at the kitchen counter and we join her for a glass of wine as Sharene starts the main course—her signature macadamia-encrusted Hawaiian ono—and for the next hour it’s just Helen with us in the kitchen! As a superstar often called England’s finest actress, she could be anything she likes, but she’s chosen to be extraordinarily down-to-earth, polite and considerate. 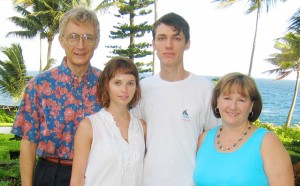 We had a pleasant chat (as they would say in England) and just as she was finishing her salad (still at the kitchen counter!) Felicity arrived. She took the other counter seat and we got to know her a little bit during her salad course, then Sharene served them the ono (to mutual oohs, ahhs, and appreciative murmurs of satisfaction) and we took our leave for the evening.

We didn’t see much of Helen after that, but after Felicity’s boyfriend, artist Edward Fornieles, arrived a few days later from England, we visited with them a little and they’re both charming. Helen and Felicity graciously signed photos for our Performers Gallery in the Hale Kakahi office. We’ve had a lot of interesting guests at Hale Kakahi over the years, but these two will be hard to beat! We’ll be excited to see The Tempest when it opens in 2009.

The Year In Review: 2008 started and ended on sad personal notes. In January, Harrison’s cousin Dan Lindner was tragically killed in a car-train collision near his home in Illinois. Harrison has eight cousins on his mother’s side, and just two years ago all nine cousins got together in one place for the very first time. It was very sad for the remaining eight to assemble again so soon for Dan’s funeral. Dan was the first of Harrison’s generation to pass away. Then in December, Sharene lost her older sister, Stevie Foust, who had suffered with deteriorating health for some time. Stevie was the first of Sharene’s generation to pass away.

The rest of the year was better despite many challenges. Our business, Hawaii Holiday Hospitality, started the year with a record first quarter and an award as one of Hawaii’s 50 Fastest Growing Businesses. Then both ATA and Aloha Airlines went out of business, the U.S. economy tanked, tourism to Hawaii dried up, and our business struggled for much of the summer and fall. We did what businesses are always told to do in a slump—we invested for the future. We hired a talented new employee and we converted to an advanced, more efficient business software system that gives us new marketing potential. Most importantly, we merged with the other leading vacation rental company in East Hawaii, A Piece of Paradise. You may recall that we started to sell our business together with APOP, but due to market conditions it made much more sense to merge than to sell. The two companies were both strong in complementary ways, so they were a good strategic fit. APOP came with its own talented employee and the original Hawaii Holiday employee left the company, so we finish 2008 with two good employees, 50 properties under contract, and a much stronger company ready to do great things in 2009. 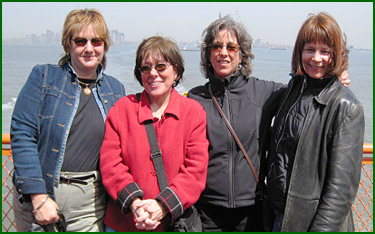 Travel News: Sharene’s annual girl’s trip in April turned into a back-and-forth cross-country odyssey. She started with a week in New York City with her three best friends Ann Amaru, Kate Nasse and Cathy Haller. Then she and Harrison met up in Las Vegas, where we saw the wonderful Cirque du Soleil production of The Beatles’ LOVE and had lunch with Doris Quinn, who was responsible for Harrison’s first trip to Hawaii 25 years ago and truly changed his life. We then drove to Zion National Park, hiking for a few days there and in nearby Bryce Canyon. Then it was back to Hawaii for Harrison, but Sharene headed to St. Louis to visit her sister Stevie and nephew John Foust, then to Kansas City to visit her brother David Tracewell and his wife Carolyne, and finally back to Hawaii after a three-week absence.

In June Harrison traveled to Seattle to attend the commencement ceremonies at Evergreen State College for his dear friends Rick & Maggie Oldenburg, who had gone back to college after more than 30 years and were both receiving degrees. Evergreen doesn’t have traditional grades or class rankings, so there is no valedictorian and they choose the class speaker by audition. We’re very proud that Rick was chosen Class Speaker for the Evergreen Class of 2008 at his tender age of 59! 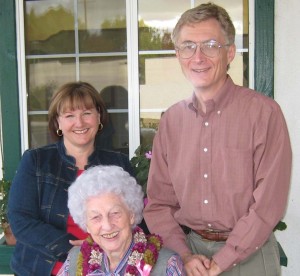 Our last big trip of the year took us to California in November. For Harrison, it was a chance to attend two festivals of his favorite music—ragtime and traditional jazz—and hear two of his favorite piano players, Carl Sonny Leyland, who played at Hale Kakahi several years ago, and Mimi Blais. For Sharene, it was a chance to visit her sister Linda Yasin and—not so much fun—to have dental surgery that she had been putting off. The surgery went fine (mahalo, Dr. Gadler!) but then she picked up a cold somewhere that stayed with her for several weeks. We had one very special treat during this trip. Lola Waechter was one of the best high school friends of Harrison’s mother, Agatha, in her home town of Sandwich, Illinois, and at age 94 is one of only two living members of Agatha’s closest circle. We had a wonderful visit with Lola at her home in Hemet, California, but we were disappointed that Gen Ann Morris, the other living member of Agatha’s high school group who was expected to join us, was not able to make it.

Visitors: We may not live at Hale Kakahi anymore, but fortunately that hasn’t stopped family and friends from visiting. (And you are still invited!) Bluegrass music stars Laurie Lewis and Tom Rozum visited at the end of January. Laurie and Tom have stayed with us before and we have attended several of their performances on the Big Island, but this time they graced us with a home concert as a benefit for a local arts organization. It was a wonderful evening of great music played by great people and one of the high points of the year.

In February, Harrison’s cousins Rick Lindner and Beth Tarjan, and Beth’s husband Bob, made their first visit to Hale Kakahi. Beth and Rick had been to Hawaii with Harrison over 20 years ago so this trip was long overdue. In March, we met up with Harrison’s former CellNet colleague, Steve Richardson, his wife Kim and their three sons. 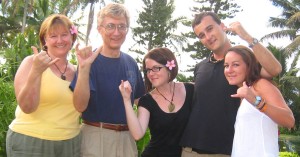 Then in August, another special treat. Amelia Batschelet, daughter of Swiss friends Sarah and the late Hans Batschelet, visited Hawaii with her boyfriend Phil Meier and his sister Stephanie. Harrison has known Amelia since birth and Sharene met her at age five, but it had been about 10 years since we saw her and what a delightful and impressive young woman she has become! 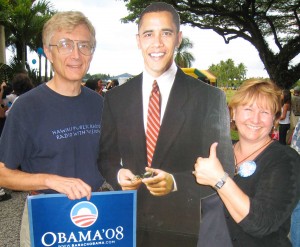 A photo of Barack Obama
with Harrison & Sharene
(read that caption carefully!)

November Brings the Best News: We can honestly say we were admirers of Barack Obama from the moment we heard him speak at the 2004 Democratic Convention, and everything he’s done since has just increased our admiration, respect and support. We are particularly proud to live in his birth state of Hawaii, a place that without doubt shaped his values and worldview. We were more involved in this campaign than any other in our lifetimes, we are thrilled with the result, and we are confident that President Obama will make our country and the world a much better place. Wishing you all a Mele Kalikimaka and best wishes for a Hau‘oli Makahiki Hou!