A Year of Contrasts

The two of us had another good year: lots of time spent with people we love; unusually wonderful weather in Amsterdam; memorable travels in the Netherlands, Europe, and the United States; and topped by Sharene’s unforgettable 65th birthday party.

But it was a very bad year for many others. We have to start by recognizing the devastating lava flow near our former home on Hawaii’s Big Island. Our old house Hale Kakahi — just four miles from the lava — was not directly affected, but many of our friends and former business colleagues lost their homes, and everyone in the area had their lives severely impacted. This video shows what Kapoho Bay — one of the most picturesque areas on the Big Island where we had many of our vacation rentals — used to look like. If you have any connection to Hawaii, we hope you will take a couple of minutes to watch. It captures the spirit of what was a unique spot on this earth and honors this very special place.

[December 2019 note: Sadly, the Vimeo video we had here was removed by its owner. The YouTube video below is a nice alternative.]

In just a few days in early June, that entire area was obliterated, covered by a fast-moving river of lava. The three photos below, courtesy of the U.S. Geological Survey, show lava approaching Kapoho, filling in the bay, and the aftermath. What was a pristine bay is now a stark, black lava peninsula. Something like 300 homes were lost just in Kapoho, and the lava took out much more — over 700 homes in total and a vast amount of uninhabited area. 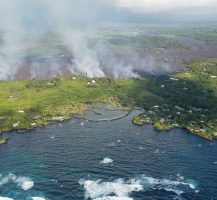 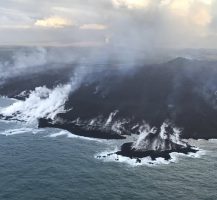 Kapoho after the flow

We’re focusing on Hawaii because it was a big part of our lives and our hearts, but our West Coast friends have also been affected by the many fires in California and Oregon, and both Harrison’s and Sharene’s families have had a challenging year of health issues. All of the good times we had this year were tempered by the suffering of so many people we care about. So we’ll forego our usual details and photos for the year and just give you a summary with the high points.

As most of our friends know by now, what sounds like a lot of exotic travel isn’t so exotic when you live in Europe and so many fascinating destinations are just a short flight or train ride away. Our trips this year together or separately on this side of the Atlantic included Barcelona, the Canary Islands, Doha (Qatar), Basel, Portugal, the Cinque Terre in Italy (twice — first in May with Amelia for Harrison’s birthday, and again in October for Sharene’s annual Girls’ Trip), Berlin, London, two Greek islands, and our 2018 Christmas celebration will be with our Swiss family near Zurich.

We took two trips to the United States this year. For a winter break in February, we flew to Savannah, Georgia, to spend a few days with Harrison’s cousin Beth and her husband Bob. Jean, another of Harrison’s cousins, joined us from her home in Indianapolis. We then drove to Nocatee, Florida (near Jacksonville), to see another of Harrison’s cousins, Phil, and his wife Joan. From there we drove across Florida to Venice for a visit with Sharene’s friend Ann and her partner Frank. Great visits and nice, warm weather to help break up the winter cold.

In October, Harrison flew to Seattle for a 3-1/2 week road trip. He spent the first weekend with dear friends Rick, Maggie, Brianne, and Laurel, and he had a nice visit with Doxie & Poh Bee. The Seattle high point was a KING Radio reunion. About 30 people who worked for KING in the 1970s gathered to celebrate a place they worked at 40 years ago — a testament to that organization’s impact. Harrison then drove Jim, KING’s then-manager who hired Harrison for his first big broadcasting job, back to his home in Dayton, Washington, and spent two days in a setting right out of the Andy Griffith Show. Next it was on to Portland for a weekend with Pete & Jan, Margie & Dave, and Barbara & Rich. Then he drove to the Bay Area for a busy week seeing Kevin, Farhad, Andrea and her daughters and several mutual friends, Laura, several colleagues from CellNet Data Systems (where he worked only 20 years ago!), Mari & Bill, Rocky & Serena, Jerry & Jeff, Jane, Steve & Kim and their son Sam, and the Stanford Business School (where he graduated 28 years ago!). He visited Laurie Lewis and Tom Rozum, who played at our home in Hawaii, and he took in a concert of theirs. He was able to visit Linda & Ralph, Sharene’s sister and brother-in-law, in Stockton before heading to Sacramento, where he ended his trip at the West Coast Ragtime Festival. There he saw both Mimi Blais and Carl Sonny Leyland perform, both of whom have played home concerts for us over the years. A fabulous time, long to be remembered.

As you know, Amsterdam and all of the Netherlands is a biker’s paradise. We had the best weather in 40 years this summer and fall, so in addition to our foreign travel we took advantage of the good weather by taking bicycle day trips to different parts of the Netherlands. The country is covered by signed cycle junctions and many cycle routes have been defined using these junctions. Holland Cycling Routes has a map showing hundreds of cycle routes, many of which are circular and intersect with a train station. You can print out a set of directions for each route that takes you from junction to junction (e.g., 60→61→5→96→95→60). We put our bikes on the train, got off at the closest station to one of the bicycle junctions, and rode from there. Beautiful memories in a beautiful country. We feel very fortunate to live here, and we are thankful now to have both our permanent residence permits in place.

The number of visitors has come down a bit since we first moved to Amsterdam, but we welcomed quite a few old and new friends this year. Els visited from Barcelona. Janice & Walter came from Basel. Venki stopped by on his way from the United States to India. Hal & Kathy from Hilo can hardly be called visitors anymore because they come several times a year. Our Swiss family — Sarah, Amelia, Hallie, and Isabel — visited us together or separately on several occasions. Barrie was here all the way from Maui. Margie visited at the end of a working cruise across the Atlantic. Siobhan housesat for us while we went to Italy. Marty & Laura from tiny Green Bank, West Virginia, visited on their way to an astronomy conference. Harrison saw Dave one afternoon during a flight layover on his way from Seattle to Spain. Deborah & Frank — who winter in Mexico and summer in Oregon — stayed with us for a few nights. We had a nice dinner with Ben & Mary Lou during their annual trip from Seattle to Amsterdam for the IBC show. We met Susan & Rod the month after we moved into our Amsterdam home and they came through Amsterdam again this year on their way to other European destinations. Long-time friends Laurie & Joe visited on their way back to Seattle after a month in Nice. We also had many dinner parties and friends dropping by for coffee or wine, and this year we even had a traditional American Thanksgiving dinner. Maybe the year wasn’t so slow after all!

The high point of the year was Sharene’s 65th birthday. The celebration began with her 23rd annual Girls’ Trip with her best friends Cathy, Kate, and Ann. For the past several years Sharene has gone to the United States to join the others, but this year they came to Europe and celebrated the fact that, as of this year, all four are retired! They started off in Italy, spending 10 days in Porto Venere, the Cinque Terre, and Lucca. They came back to Amsterdam just in time for the only birthday party Sharene has ever planned for herself, and it was a smashing success. We had it at the Schreierstoren, a 531-year-old building in central Amsterdam. Henry Hudson set off on his voyage to North America from this very location (he was English but the Dutch had the best shipping technology in those days).

About 75 people joined us for an evening of love, friends, food, music, and celebration. Our friend Frank acted as emcee, and about halfway through the evening he announced a surprise. It turns out that ever since we lived in Hawaii, Sharene has wanted to surprise Harrison by dancing the hula for him. She discovered Harry, a kumu hula (hula master), who has his own hālau (hula troupe) right here in Amsterdam. Harry choreographed a hula from the beautiful song Kipahulu, about a remote spot on Maui that is Harrison’s single most favorite place in all of Hawaii, and Harry taught his hula to both Sharene and our Swiss hānai daughter Amelia. They did all of this in secret, and they surprised Harrison and everybody else at Sharene’s party with a beautiful performance that brought tears to Harrison’s eyes — and those of many other guests as well.

One of the guests captured the hula on video, so we put it up on YouTube together with a slide show to remember the people and the party.

Harrison turns 70 next year but he’s not even attempting to top Sharene’s party! 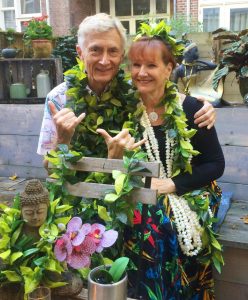 Although it has been a tough year for many of those we care about, we wanted to end our annual Christmas letter on a positive note with the video and photos from the party. We have now been together for 32 years, married for 27, and writing holiday letters for about 25, and every year is different. For this year, we send our heartfelt aloha to those in our families, in Hawaii, and on the West Coast who have suffered so much, and we wish everyone a safe, happy, and most of all healthy 2019.