Boston Celebrates and We Love The North End

BOSTON CELEBRATES THE STANLEY CUP WITH A MILLION BRUINS FANS!!! 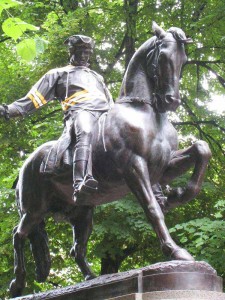 Saturday was a GREAT day for Boston! Over a million people took to the streets for the parade to honor the Bruins, their beloved hockey team who won the Stanley Cup for the first time in 39 years after a tough 7 games against the Vancouver Canucks. Harrison lived in the Boston area the last time the Bruins won the Stanley Cup, and he left the following year. Now he’s finally back and they win again. Coincidence? We think not!!

After the parade, the fans all changed out of their black and gold shirts, put on their red and blue ones, and headed out to the Red Sox game: if you were in the crowd and not wearing black, gold, red or blue, they knew you weren’t from Boston! This is a town with a huge dose of pride when it comes to their sports teams. People have been wearing their jerseys all week long and it’s all you hear on the news. Even Paul Revere was decked out in a Bruins shirt!

Although we’re not professional sports fans, we planned to go to a Red Sox game while we were in town so we could see historic Fenway Park. We didn’t realize the Red Sox have sold out every home game since 2003! By the time we tried to order tickets for this home series, there were no two seats together in the entire stadium, and Fenway Park holds almost 40 thousand fans! We are SO not in Hilo anymore.

So with all the celebration and whooping and hollering and the excitement in the air all around the city, we did what any two self-respecting non-sports-fans and crowd avoiders would do: we went to a museum! We did have to make our way through thousands of fans, though, to get to the subway, so we guess you can say, “we were there!”

SO, WHERE WERE YOU ON NOV. 22, 1963? (How humbling that we know there are many reading this who weren’t even born yet!) For those of us who can pinpoint exactly where we were when John F. Kennedy was shot, a trip to the JFK Museum and Library is a melancholy reminder of another era. A beautiful tribute to a young man who planned to be a writer but turned out to be a very deft and beloved politician, president and statesman. A great way to spend the afternoon and a nice refuge from all the celebrations going on in the streets!

THE NORTH END NEIGHBORHOOD… CI PIACE!!!! (We love it!) 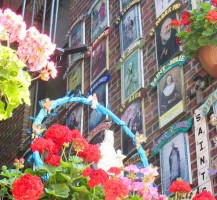 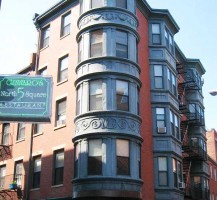 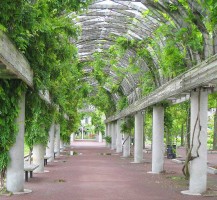 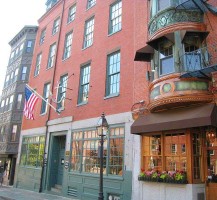 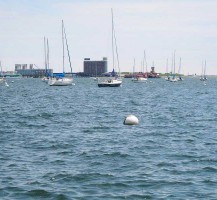 We may not be pro sports fans, but we do love the North End of Boston. This place is a walker’s dream; in fact, we haven’t driven our car in two weeks. The North End is the Italian area of Boston — you hear people speaking Italian all the time and Italian opera coming out of some of the store fronts. MAKE NO MISTAKE THOUGH, BOSTON IS A VERY DANGEROUS CITY!!! We’re being assaulted at every turn by all the Italian restaurants, cafes and gelato shops within just a few blocks of where we live! The sights and aromas from the cannelloni, capellini, ravioli, cannoli, biscotti, tiramisu, tortoni, loaves of ciabatta and cups of cappuccino are intoxicating. Then you have the old buildings, beautiful architecture, the harbor, the parks; it’s all very charming and has made our experience here fantastic. (Much different than when Harrison was a student, living in cheap housing and getting robbed 7 times!) 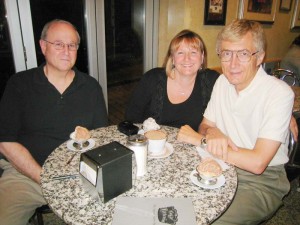 Speaking of Italian goodies, here we are indulging in a gelato and cappuccino night cap with Kevin. Harrison and Kevin have been friends for (yikes) over 40 years. They both went to MIT, worked together as broadcast engineers, shared an apartment for a time, and have kept in close touch since. Kevin grew up in Boston but has lived near San Francisco for over 30 years. He happened to be on vacation in his home town so we had him over for dinner, and afterward we took a nice walk to Hanover Street for dessert.

We had another great evening this past week, taking a scenic walk along the new Harborwalk (just built in 2009) to the Blues Barge. Every Thursday night in the summer, the Boston Harbor Hotel offers a free blues concert from this floating stage. It was a perfect warm, clear, gorgeous night to listen to some good music and then walk home. Life is good and we’re having a great time in the big city. 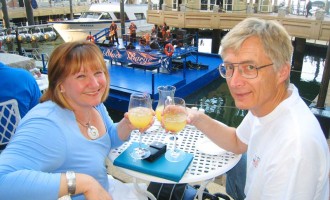 At the Blues Barge 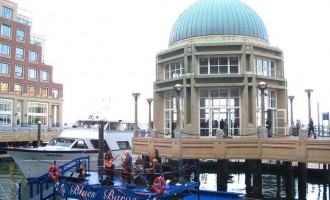 It’s June 19th and we want to wish all the dads out there a wonderful (sports filled or not!) Father’s Day, and for all the people out there who still have fathers, don’t forget to call….

A hui hou and arrivederci!Sharene and Harrison