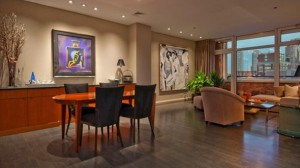 On Monday we drove from Cape Cod to Boston and moved into our chic apartment (thanks once again, craigslist!) in the historic North End (Boston’s Little Italy) where we will stay until we leave for Europe July 6th. Our apartment is in a former chocolate factory with plenty of room for us and our computers and with a guest room for any of you who might want to visit us before we jump the pond.

For the first time on this trip, we have found the type of urban environment we envisioned when we started, where you can get to everything you need by walking or public transportation. Shops, restaurants and fabulous architecture are all within an arm’s reach and we’re across the street from the wharves with a nice view of Boston Harbor. Sharene is in heaven and if we weren’t already booked to Europe, she would probably just stay here!

We expected to have a quiet week getting settled into the apartment and exploring a bit of Boston. Then we got an invitation to dinner Tuesday night with Harrison’s friend and MIT colleague David. Like Harrison, Dave also spent a lot of time at the MIT radio station when he was a student, and he later lived in Palo Alto, where he knew several of Harrison’s friends. For the last few decades he has been a Professor at MIT, where he is a leading researcher in a field known as Computational Genomics, in which computers are used to model complex biological processes. Oh, and along the way Dave just happened to invent the technology for making payments over the Internet. 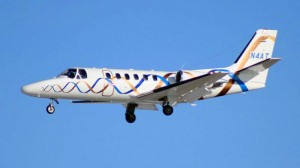 During the delicious dinner with Dave, his wife Heidi and their daughters, Dave mentioned that he was flying his airplane to Orlando the following morning to do some routine recurrent pilot training. Harrison knew Dave was a pilot, but it was only then he learned Dave’s airplane is a Cessna Citation jet! That’s his airplane on the left, with its unique double helix paint job representing Dave’s work in genomics.

Jets are very complex airplanes. All good pilots do recurrent training on a regular basis and Dave trains with the best, FlightSafety International. After mentioning that he was flying to Orlando, he made us one of those offers you can’t refuse: “Why don’t you fly to Orlando with me?” We couldn’t get ready in time to leave early the next morning, and Sharene decided to remain in Boston, but Harrison made arrangements to fly commercially to Orlando Friday morning, watch Dave and his copilot, Leslie, while they trained in one of FlightSafety’s full-motion simulators (which are so lifelike that the FAA certifies pilots to fly the real jet after training in the simulator), and then fly back to Boston with them Friday evening. 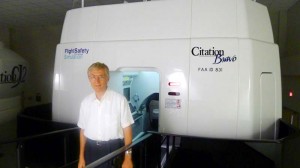 When Harrison arrived at the FlightSafety simulator (photo at right), the instructor was running Dave and Leslie through a gauntlet of engine failures, weather problems, equipment malfunctions, and even a cockpit fire (all simulated, of course, but very real) that stretch the pilot’s ability to handle any emergency. Being about to fly a thousand miles with these pilots, Harrison was happy to see that they handled every problem professionally, safely, and successfully.

Here’s Harrison on what happened next: Then Dave surprised me: “Why don’t you take the left seat and fly a little?” WOW. What a generous offer — these machines are expensive! I climbed into the left seat of the simulator and the instructor set the airplane down at the end of Runway 4R in Honolulu (in a simulator you can go anywhere instantly). I know the Honolulu airport very well and there was the tower, the terminal building, and all the general aviation buildings out my (simulated) window, just like they look in real life. With Dave’s help in the right seat with some of the engine controls and avionics, I took off, flew around Honolulu, landed, took off again, flew down the Oahu coast a bit, came back and landed one more time. It wasn’t the most graceful flying I’ve ever done, but I made it back without damaging the airplane or doing anything really stupid. Since it was a completely new kind of flying for me, and probably the closest I’ll ever get to flying a jet, I’ll consider it a success! That’s me at the top of the page in the left seat of the simulator. 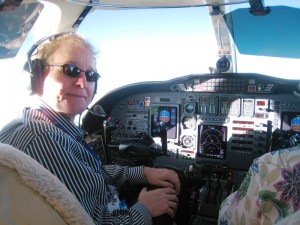 Then it was time to fly back to Boston in a real airplane. The jet was waiting for us next door at the Cessna service center, and within a few minutes Dave and Leslie did their preflight and we took off into a beautiful Florida evening. Dave wisely chose NOT to invite me to sit in the left seat on this flight! (That’s Dave in the left seat.) But I was just behind him and able to follow everything he did throughout the flight, including diverting around a large formation of nasty thunderstorms. 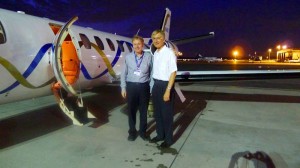 About three hours later we landed at Hanscom Field in Bedford, Massachusetts, a fitting destination since I learned to fly at Hanscom 42 years ago. It was a magical day and certainly one of the peak experiences on this year-long journey that has been full of peak experiences. Thank you, David, for giving this very-part-time pilot an unforgettable adventure! 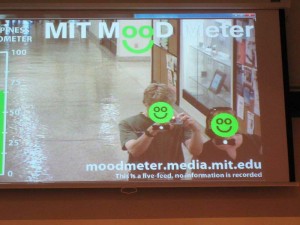 So it’s been another good week: Sharene falling in love with Boston, a gorgeous, chic apartment within walking distance of everything, and a fun day of flying for Harrison. Not to mention the discovery of cannoli at the famous Mike’s Pastry! So when we spent an afternoon exploring MIT it was no surprise when the MOOD METER caught us smiling as we walked down the famous “Infinite Corridor”. Yep, the facial recognition system puts a happy face on you if you’re smiling — or a sad face if you’re not! Those MIT people aren’t just smart, they have a sense of humor, too…

Until next week,A hui hou!Sharene and Harrison