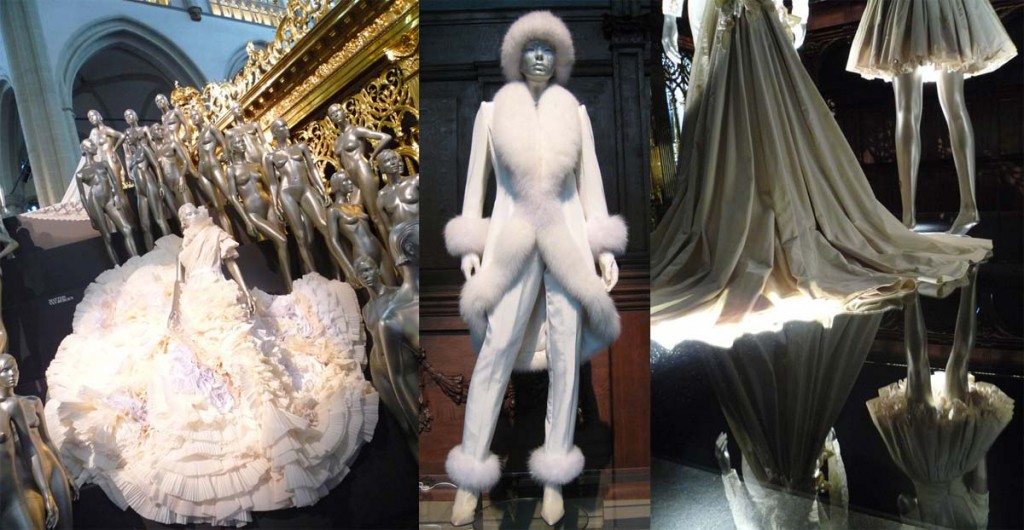 You would think after two months in Amsterdam we would have seen most of the sights. But since our dear friend Sarah hadn’t been to Amsterdam since 1973, we waited until she arrived to see Amsterdam’s largest church temporarily filled with 300 naked mannequins and scores of unique bridal outfits! Sarah was managing editor for a corporate Swiss magazine in her last job, so we asked her to follow in her daughter Amelia’s footsteps and write for us: so here’s Week 34 from Sarah’s perspective… Enjoy! 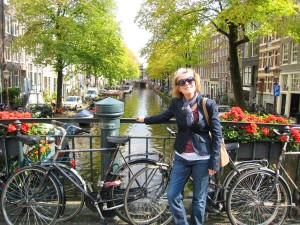 Thirty-eight years have passed since I was last here as a college student, but Amsterdam’s charm and the palette of stunning visuals have hardly changed. The architectural details, water and what Sharene and I have called “humpy bridges” make the city something almost like a total work of art. The exhibition of bridal gowns partially pictured above is no exception: Amsterdam couturier Mart Visser, in his role as church warden for 2011, designed a flashy extravaganza to mark “The New Church” as having been inextricably associated with weddings throughout its 600-year history. The silver-painted mannequins acted as bridesmaids in a show that speaks as much to fashionistas as it does church historians, museum preparators and a public hungry for fancy dress. What a way to use a space! 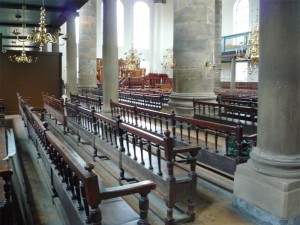 Infinitely humbling, though, was our visit to the Portuguese Synagogue later in the week. When Nazi Germany invaded Holland in 1940, there were some 120,000 Jews living in Amsterdam, a figure that had been reduced to about 15-20,000 after the war. Why this remarkable synagogue remained undamaged is a mystery, as the building was certainly an exception in what was occupied Holland. As visitors, we had to pass through a security system of two locked doors and glass before admission, reminding us that even today, the world is still so sadly subject to conflict around religion. The sounds of hammering and electric saws, the synagogue’s restoration project, were much more positive.

Actually, the sounds of construction are pretty much all around us.The canal boat owners are forever repairing bits of their property, and the care the city shows all its monuments and invests in its cultural offer are impressive. Harrison and Sharene’s apartment is within two tram stops of dozens of historic houses and fine art collections, including the superb Rijksmuseum, where I spent that one summer working on a Rembrandt paper. The Concertgebouw, which houses one of the world’s finest orchestras, is another 10-minute saunter away.

Walking to all of these tremendous sites made me aware of another Dutch phenomenon: the loose boundaries around personal privacy. Typically, the canal houses have stories that house separate apartments. On the lowermost floor, windows opening out onto the street offer unhindered views of families doing whatever families do: enjoying their meals or checking their calendars. The take on private space in my “native” Switzerland is an entirely different kettle of fish! 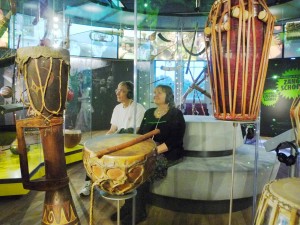 The picture opposite shows two very happy campers at the Royal Institute of the Tropics, which falls into the category of ethnographic museums. Featured among the exhibits there was a “Music of the World” area that was no less than an audiovisual delight. While I followed the drumming tapes and learned more about the differences among the world’s stringed instruments, my two mesmerized hosts focused on the ukulele video and enjoyed some of the sounds of home. 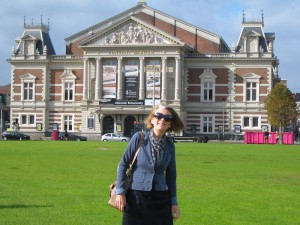 On my last full day in this pulsating little city, we went to the Carre Theater just across the Amstel in the afternoon to hear David Sedaris, the humorous novelist and NPR great, whose reading had us all in stitches. Then after supper, we hurried off to the Concertgebouw for a concert by the young virtuoso Russian pianist, Alexander Romanovsky. Imagine: the audience gave him a standing ovation even before the break! For my part, having wanted to visit this spectacular hall (1888) for years, I was over the moon to do so!

Music aside, though, the most lasting memory of Amsterdam this trip will be the lovely bicycle ride we three took in the Vondelpark. Sharene expertly maneuvered her bike through Saturday traffic over to the shop where Harrison and I could rent ours, and we all headed out for an easy ramble on wheels. When I last visited at the end of the hippie era, the Vondel was the “Needle Park” of the city, and my impression of it was that everyone there was in granny glasses and buckled down over their hashish pipes. Not so this time! Instead, young families, bikers, skaters, and even oldies like us proliferated, and the mood was entirely carefree for other reasons. We even got in a few games of Bananagrams after our picnic lunch, which — even though Harrison beats me every time by a long shot — made for the perfect Saturday afternoon! 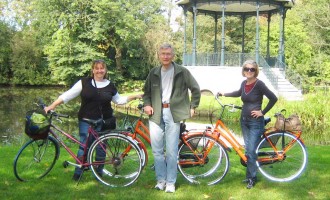 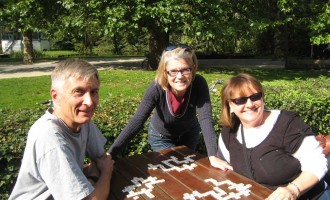 In conclusion, I can only add that Amsterdam with these two expert Bananas has been better than ever! And, as Sharene and Harrison always say, a hui hou!