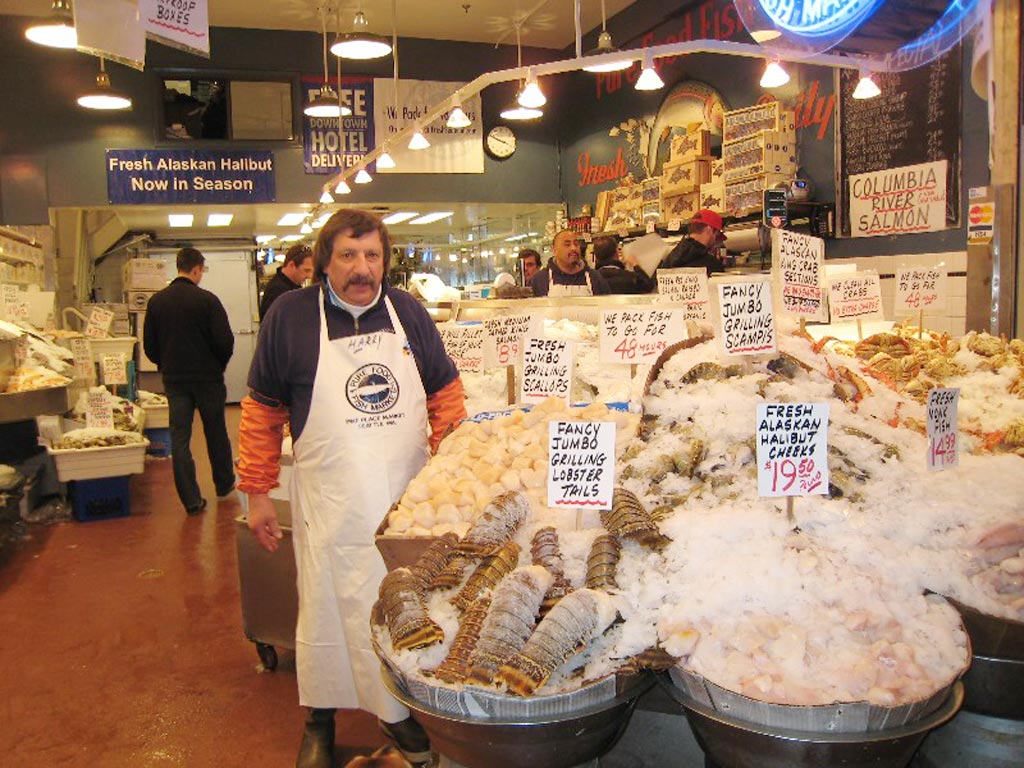 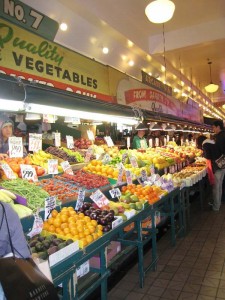 Our friend Jeanne’s visit ended last Monday with a trip to the famous Pike Place Market, an open-air market that is over 100 years old with lots of shops and cafes, vendors that sell everything, great produce, and amazing fish! Jeanne and Sharene celebrated their last night with fresh crab, sourdough bread and a nice chardonnay, and played a game of Bananagrams. Sharene has known Jeanne for over 30 years and had no idea she grew up with a different dictionary than the rest of us… we had some fun laughs at some of the words she thought up!

Thursday night we saw the Dukes of Dixieland play at Benaroya Hall. If you like traditional jazz weaving strands of pop, gospel, and country with authentic New Orleans sounds, then these are the guys for you. Funny thing was, Sharene had the famous New Orleans funeral song “Just A Closer Walk With Thee” going around in her head for days afterward, but they didn‘t even play that one. Ah, the power of suggestion….

We checked in with our former partner and friend, Steve, to see how he and his wife Iku were doing in Japan. They own a beautiful home on the Big Island and we asked why they hadn’t left to come to Hawaii to get away from Japan. His answer was quite moving: there is a very strong sense of community and of not giving up here and we feel a commitment to stay. All the foreigners that I know here feel the same way. Rather than leaving I actually have strong desires to go up north and volunteer to help; I wish I had the language skills to make that feasible but I know I would just be in the way.

The sentiments he wrote are similar to other stories we have heard coming out of Japan. An amazing time in their history.

Just when we were discussing how there had been no natural disasters for a few weeks, no broken bones or big illnesses with us or our friends, we got a call from Rick. (Remember Rick? He fell and broke his hip a couple of weeks ago.) Well, Laurel, his younger daughter, ended up in the hospital with pneumonia this weekend! So off we went to visit Laurel at the same hospital where Rick had his surgery just 10 days ago. 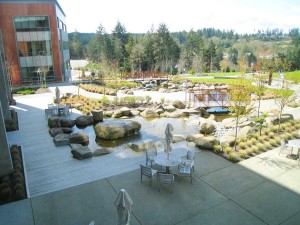 So this is the part where we tell you about Gig Harbor and its amazing hospital, St. Anthony, which could almost double as a 5-Star resort. (Harrison calls it the Taj Mahospital.) This photo is just one view looking out to the courtyard, but this is one impressive, huge state-of-the-art hospital… and Gig Harbor is just a small seaside town south of Seattle with LESS THAN 10,000 PEOPLE!

Poor little Hilo will never see anything like this…. 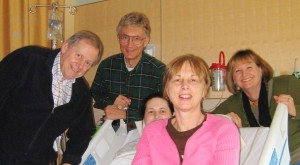 Not one to stay down for long, Laurel’s hard to see behind Maggie, but she’s laughing and smiling and happy to have visitors even though she’s really sick. Laurel is an occupational therapist and has worked at this very hospital, but this is the first time she’s been a patient, so she’s fascinated to be on the other side of the fence and might have a little better understanding of her own patients once she’s back to work.

So now Laurel and Rick now have matching walkers!! These two have such a great outlook on life, we know they won’t be down long. 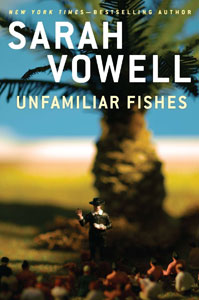 So here’s another “we’re not on a little island anymore” story… Harrison went to hear Sarah Vowell (author and public radio commentator) give a talk on her new book Unfamiliar Fishes, a look at the history of Hawaii from the arrival of the missionaries to the overthrow of the monarchy and annexation to the United States. Sounded to him like a pretty obscure topic for a Seattle audience, but the 800-seat hall she was speaking in was completely sold out! He didn’t get to hear her, but he bought the book and highly recommends it if you’re interested in how Hawaii came to be the way it is. It’s an interesting read even if you’re not all that interested in Hawaii, because so much of what happened in Hawaii was related to bigger US and world issues of the time that are relevant even today.

So that’s it for Week 11! We’re on the countdown here in Seattle, only 10 more days here in this beautiful city. Thanks for letting us share a part of our lives with you and we wish you all a safe and uneventful week, because sometimes uneventful is a good thing!