SEX! Now That We Have Your Attention…

Week 41 is about sex. After all, we have been here in Amsterdam for four months and we’ve barely mentioned it, although sex is one of the things people think about (that and “coffee shops” where they sell pot) when they hear “Amsterdam.” There is a lot of sex here, like everywhere, but here it’s out in the open. Interest in sex here just seems normal, unlike the United States where anything overtly sexual often looks seedy and illicit (because it’s usually illegal). In Amsterdam, sex fits into the city like all the other possibilities of things to do and see including the museums, art galleries, concert halls, theaters, canals, houseboats, and friendly people.

The most obvious example of sex in Amsterdam is its famous Red Light District. There are actually three different ones, each of which has streets and walkways lined with women behind windows (yes, with red lights). The main one is right in the center of Amsterdam in a very picturesque tourist area. We walked through it last night and took the photo at the top of the page. This scene is at the edge of the Red Light District; you can see a couple of windows on the left. Taking detailed photos of the occupied windows is discouraged, but the web has many photos of Red Light District windows.

The fact is, you walk right through this area to get to many tourist attractions and local businesses, so after a while it doesn’t seem strange at all. You see locals and tourists, adults and families with kids, people of all kinds walking through it. And the Red Light District windows are just one part of the legal sex industry, which also includes brothels (called “Private Houses” here), sex shows and clubs, many types of massage parlors, escort services, and straight and gay bars where sex is very much out in the open. Most of these establishments are licensed, and the women who work there (they are almost exclusively women) have health care including regular STI tests, pay taxes, and have the same rights and protections as traditional workers.

There is a sex industry in every large city in the world (and most small ones, too), but here it just blends in with everything else and, from what we can see, there is little drama associated with it. The fact that it is legal, together with other government policies, keeps it largely free of crime and the human trafficking problems found in many other parts of the world. Just like any other industry, some sex businesses are run well and some badly. Just like any job, sex work undoubtedly has its bad customers, bad co-workers, bad bosses, and bad days. But most of the women are gorgeous and certainly don’t have obvious drug problems or look like they live a seedy life. They look happy, like most everyone else in this city!

In fact, we haven’t found a sad person yet or even anyone who seems to be in a bad mood! (Is it because no one is sexually frustrated???) 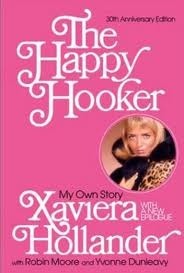 Speaking of happy hookers; we met the most famous HAPPY HOOKER this week!

You may remember the popular book published in the 1970s called The Happy Hooker by Xaviera Hollander. Yes, she is Dutch and she’s still here. She now runs a bed and breakfast, has a vacation rental in Spain, writes books, and produces some theater. We were in her neighborhood the other day and decided to drop in and say hello. She’s now 68 but still full of energy and her eyes have the sparkle of someone who has indeed led a very interesting and unusual life. We told her about our background and we consoled each other about how hard it is to make reservations and deal with property management. Then, she asked us if we wanted to buy her B&B!!!

Now that would really bring us full circle, wouldn’t it? 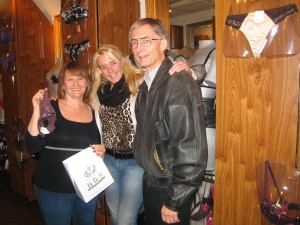 When we stopped in to see Xaviera, we really and truly were “in the neighborhood.” In this same area, Desirée, one of our new Amsterdam friends, owns DeDe’s Underworld, a high-end lingerie shop on Beethovenstraat, which is an exclusive shopping street in the southern part of old Amsterdam.

We had fun visiting Desiree and she helped Sharene pick out some new pretty lingerie… even Harrison assisted! 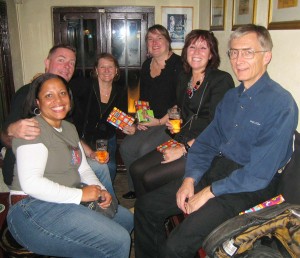 Of course there are many gay bars here and a large gay population. We met some friends at a hetero-friendly gay bar in a busy area of Amsterdam not far from the Red Light District. It was a bustling place, but we managed to “score” our own little room (or as we would say in Hawaii, puka) and had a lot of laughs.

Our friend Frank brought us goodies from Sinterklaas, a Dutch saint who was one of Europe’s traditions from which the American Santa Claus was created. Check out the Wikipedia page; it’s really interesting! (No sex in this paragraph, in case you were wondering!) 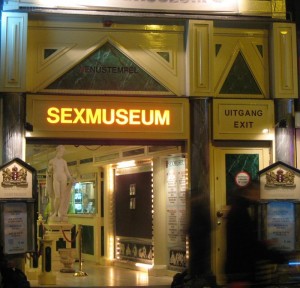 It’s our last week here and we’ve been to almost every museum in town. We even visited the Museum of Bags and Purses (but we skipped the Vodka Museum and Torture Museum). Before we left, we thought we should see the Sex Museum, so off we went last night to check it out.

The Van Gogh Museum it was not, but it was what you might expect: a bit of history (turns out sex has been around a really long time!) and some displays of paraphernalia, old photos, and some things that you just had to have a good laugh about.

We find it interesting that Amsterdam is an appealing, engaging, vibrant, world-class city without much visible crime (organized or random), drug problems, or homelessness. Is it because they offer legal services that are associated with these problems, which avoid the illegal and often dangerous alternatives found in most big cities? We’re sure Amsterdam has some crime and drug issues, but having lived in many big cities including New York, Chicago and San Francisco, we haven’t seen anything here like what you find in those places. We have never once felt uncomfortable walking around, no matter where or what time of day or night. We think the chances of getting hit by a bicycle far outweigh getting robbed or your pocket picked.

Like we said, people are happy here, and so were we. We’ll be sad to leave next week but it will be on to a new adventure.

For those of you who have been with us since Week 25 when we arrived in Amsterdam, thank you for letting us share so many weeks of our life here with you. We have never been bored even once and we hope you haven’t either. One more week and then we’ll bring you news of Berlin, Prague, Vienna, and some of Italy as we embark on our Eurail trip.

Until then, have a great week and a hui hou!Sharene and Harrison