We returned from Germany to spend our final few weeks in Amsterdam, and we had a positively uneventful week! After 39 weeks of having way too much fun, seeing lots of dear friends, and meeting some wonderful new ones, Week 40 was one of movies and getting organized.

Our Seattle-area friends Rick and Maggie sent us some movie DVDs, which we had a great time watching this week — thank you! We also took in some of Amsterdam Film Week, an annual event that features pre-release and recent films that have won awards at other film festivals throughout the world. 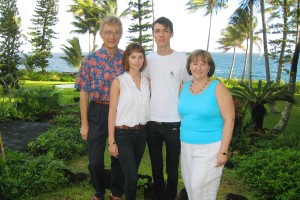 We loved the film Hysteria and can highly recommend it when it comes to a theater near you. Believe it or not, it’s “a romantic comedy about the invention of the vibrator,” and a very interesting and funny true story it is. Set in London in the 1880s, Hysteria stars Maggie Gyllenhaal in a brilliant performance and also features Felicity Jones, who, with Helen Mirren, stayed at our house on the Big Island in 2008 when they were filming The Tempest. The photo to the right shows us with Felicity and her boyfriend Ed Fornieles. The Hysteria trailer does a nice job capturing the look and humor of the film.

When we weren’t watching movies, we were settling into our new home for the next three weeks. Our third Amsterdam apartment is on Frederiksplein (a lovely park) and about a block from shopping and the tram. The apartment is filled with original, gorgeous art painted by the owner, Annemiki Bok, the artist we visited outside of Amsterdam in Week 33 who owns the church she converted to a house and studio. 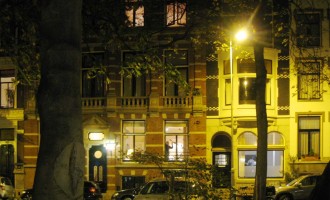 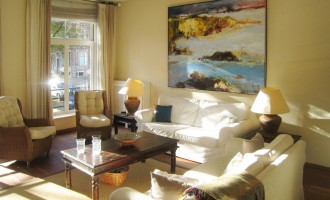 We began the process of organizing ourselves for a Eurailpass train trip beginning in a couple of weeks, followed by the Christmas and New Year holidays in Switzerland and our return to the States in January. Our original planning back in Hawaii had to take into account long stays in Seattle, Boston and Amsterdam, and that took a whole lot of luggage. Now we need to become serious travelers, carrying everything we need in as little space as possible. That means shipping back much of what we had with us, and that’s our main task for these last weeks in Amsterdam.

So that’s all there is for this week. We will leave you with two interesting photos we took recently. Although we are half a world away, we are reminded of our beloved Hawaii even here.

Have a great week everyone.

Aloha and a hui hou,Sharene and Harrison 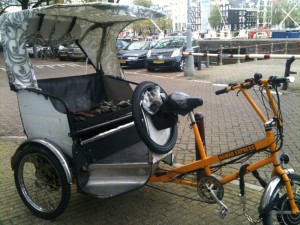 HAWAII EXPRESS on the frame of an Amsterdam bike 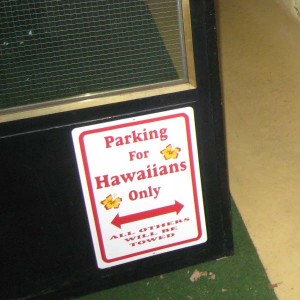 Posted on a storefront in Frankfurt