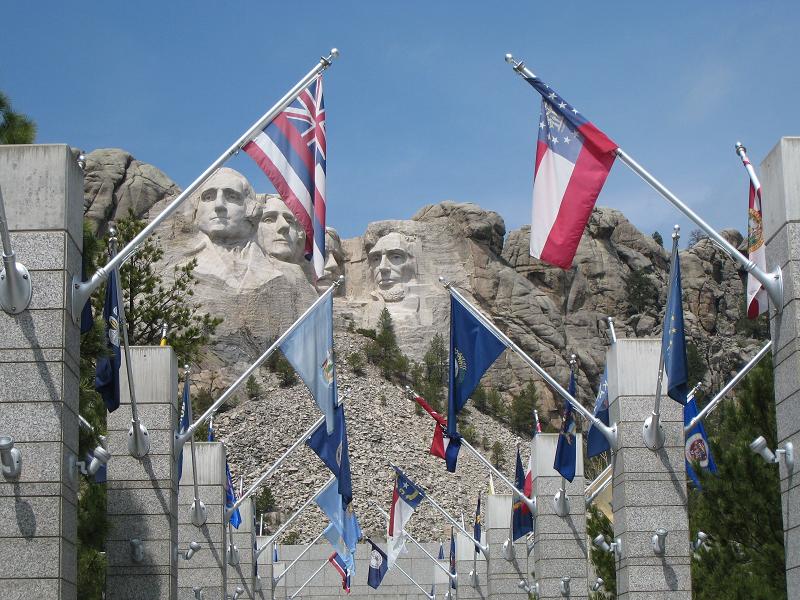 Cowboys and Indians, Custer’s Last Stand, Lewis and Clark, Crazy Horse, the Badlands, four Presidents and John Wayne. Throw in a few famous covered bridges, an English castle in Iowa, a renowned drug store, and visits with friends and family, and that’s our Week 15!

Mt. Rushmore was dramatic and imposing, one of those monuments that makes you proud to be an American. You walk down a long promenade displaying the flags of the states and look up at these amazing leaders of long ago, representing the birth (Washington), expansion (Jefferson), preservation (Lincoln), and development (Roosevelt) of the United States. We pondered which modern-day presidents might be considered for immortalization on this mountain with the divided country we have now. We decided it’s best to just admire these four and pass on the debate…

Then there was Crazy Horse. Sculptor Korczak Ziolkowski began this towering monument-in-the-making over 60 years ago and, as of today, they have his face completed. (Makes Hawaiian time look like the speed-of-light!) You can see the model below and the progress so far, but get this: it’s so massive, you can fit the four heads of Mt. Rushmore in the section where his hair will be flowing back. This is one big art project. Privately funded, it won’t be done in our lifetime, but it sure is a noble tribute to Native Americans and, in our opinion, they deserve such a grand display. 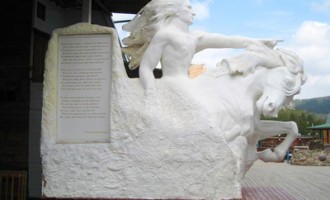 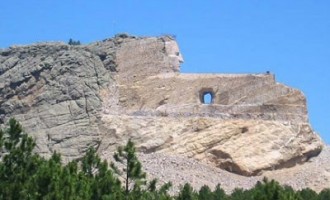 We loved Badlands, the only National Park left with no restrictions on where you can wander. Our off-season visit once again let us enjoy a popular park with only a handful of other visitors. The luscious green prairies (normally brown during the dry summer tourist season) provided one edge of a beautiful frame for the fascinating rock formations in the park, with the gorgeous blue sky on this picture perfect day forming the other edge. All the better to see the prairie dogs and the HUMONGOUS bison. (Lesson of the day: the correct name for the American animal commonly known as buffalo is bison). Lots of baby bison were running around their mammoth 2000-pound mamas so, needless to say, the photos of these behemoths were taken from the car window! 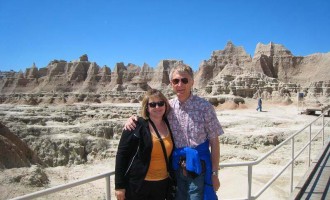 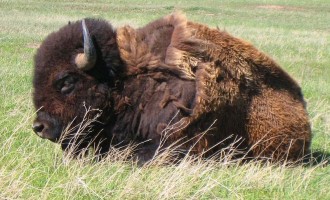 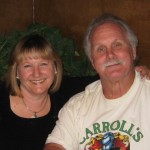 Good thing we had great weather in the Badlands, because it turned gray, wet, rainy and unpleasant for our 12-hour drive from South Dakota to Iowa. On the way we toured another Lewis and Clark Interpretive Center in Sioux City, Iowa (those guys had a major impact throughout the West), but the drive had one big highlight: dinner in Missouri Valley, Iowa, with Jerry and his wife. Jerry was a high school friend of Sharene’s brother and she hadn’t seen Jerry for (gulp) 40 years (it really hurts to say that). But it was great to reconnect — thank you Facebook! 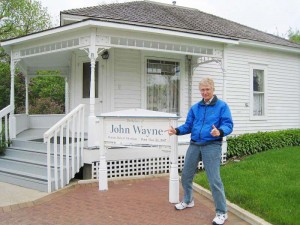 Another piece of trivia everyone should know: The Duke and Harrison share the same birthday! (Harrison’s a little younger.) John Wayne was born May 26, 1904, in this house in Winterset, Iowa. 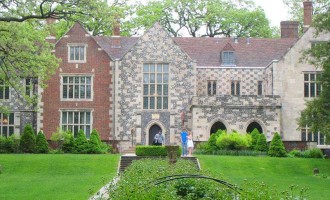 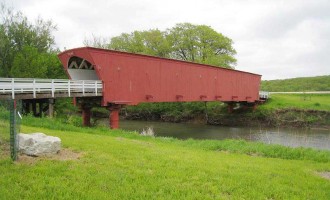 One of the actual Bridges of Madison County. 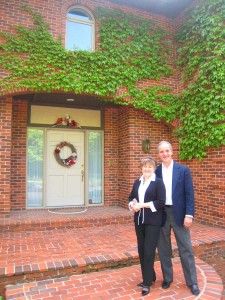 Hard to believe this young-looking couple has been married 46 years!

It wasn’t John Wayne’s house that brought us to Iowa, or the covered bridges, or the English mansions. It wasn’t even that Harrison’s favorite musical, The Music Man, was conceived here. It was the chance to be treated like royalty by Harrison’s cousin, Phil, and his lovely bride of 46 years, Joan, who live in Des Moines. Phil and Joan visited us at Hale Kakahi twice in our 10 years on the Big Island and we have wanted to visit them for years. We thank them so much for their amazing hospitality in their own mini manor house (pictured right). Joan is the most incredible cook and hostess and Phil could not have been more gracious and always has a great story to share. They didn’t just send us to the sights of Iowa, they played tour guides to the city, the covered bridges, the Salisbury House, the Des Moines Symphony and more, and we thank them so much for making our Iowa experience unforgettable!

Although we know you would be fascinated (!), we’ll skip the details of our visits to the Little Bighorn, site of Custer’s Last Stand, and to famous Wall Drug in South Dakota. We say goodbye to Iowa on Monday, and as Wilbert Harrison says, we’re Goin’ to Kansas City, Kansas City here we come!

This week we’re hoping to find spring and maybe even a little sunshine!

A hui hou!Sharene and Harrison