A Local Tribute To a Man Who Changed the World 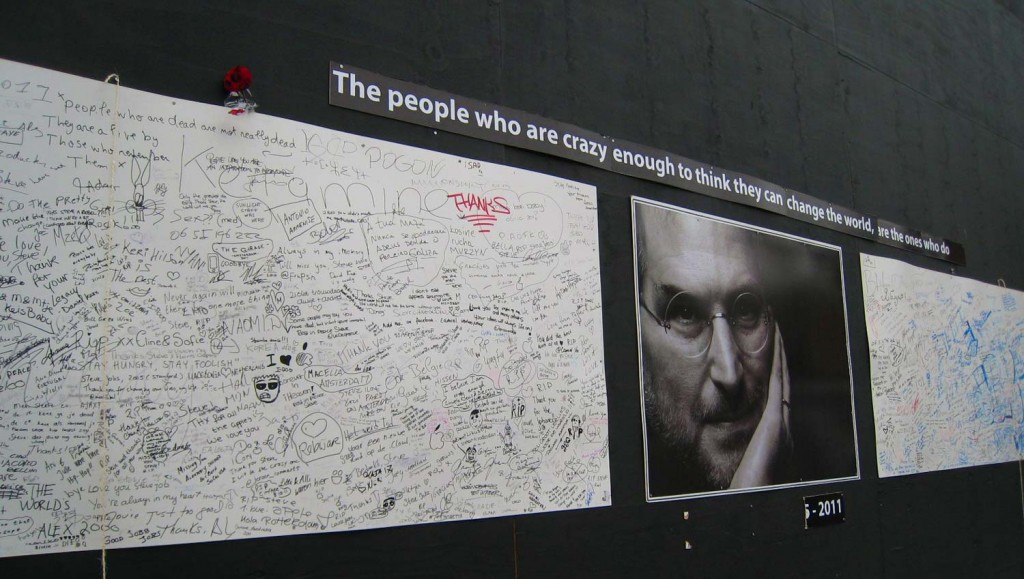 When we got off the tram at the Leidseplein in Amsterdam this morning to meet some friends for breakfast, we discovered this 30-foot tribute to Steve Jobs tacked up on the side of a building. No doubt similar signs of respect and gratitude have appeared around the world. If you live in an urban setting pretty much anywhere, all you have to do is stand in a busy area, make a 360-degree turn, and you will see iPods, iPhones, iPads, and other creations that exist because of this man’s vision. Pretty powerful.

Besides using Apple products since almost the beginning (Harrison began using the original Apple II computer in 1979, his main computer is still a Mac, and we both have iPhones), we had a couple other connections with Steve Jobs. Some of you have heard these stories, but they are good ones, and this week we think they are worth telling again.

Harrison went to the Stanford Business School with many bright, interesting and beautiful people. One of his classmates in the year after him was a woman named Laurene Powell. The school often attracted top business leaders to give talks, and Laurene attended one with Steve Jobs. Steve was sitting in the front row of the auditorium waiting to speak, and Laurene introduced herself and let him know that she had won the business school contest in which the prize was a lunch with him. They exchanged contact details and set up the lunch. Well, they had lunch, soon became serious, ended up getting married, and by all accounts had a wonderful 20+ years together.

The twist to this story is that there was no contest. Laurene made it all up! You have to admire her ingenuity and bold self-confidence.

At the time, Sharene owned her bed & breakfast reservation service, and Harrison was involved in that business and his own entrepreneurial interests, so we were fortunate enough to be invited to that dinner. We arrived and a young woman who introduced herself as Lisa (we learned it was Steve’s daughter for whom the ill-fated Lisa Computer was named) ushered us in. The home was beautiful but they hadn’t gotten around to buying furniture yet, so we sat on cushions on the dining room floor and ate dinner on a big comforter! Steve came in and we all traded questions and answers and shared our experiences. An unforgettable evening… we especially loved watching Steve and Laurene interact with each other.

Thank you, Steve Jobs, for a very nice evening and, oh yes, for making our lives better. 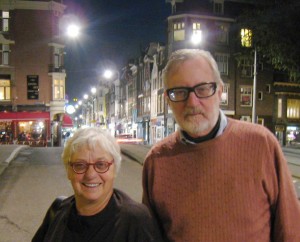 Mary Lou and Ben on Utrechtsestraat

As you have seen from our weekly updates, we have not been bored or short of company. When you choose an interesting place to live, you can always be assured someone will visit.

Harrison has known Ben, a consulting engineer from Seattle, for over 40 years. For several years they were officially competitors, but in the small world of broadcasting they always saw themselves as professional colleagues and have remained good friends.

One of our first dinner parties on this year’s adventure was at the home of Ben and his wife, Mary Lou, during our stay in Seattle last winter. We got to see Ben and Mary Lou again a few weeks ago when they came to Amsterdam for Ben to attend the annual IBC Conference and Exhibition, one of the world’s largest broadcasting trade shows. We had a couple of dinners together as well as a private showing of our beloved Taylor Camp film, and Ben was kind enough to get Harrison a pass to the gigantic IBC exhibition hall.

Janice and Walter in front of the Concertgebouw

This past week, our friends Janice and Walter came from France to see us for a few days. Although they live only a few hundred miles away, they hadn’t spent much time in Amsterdam so their trip was a wonderful getaway. Janice is American (although she has been in Europe for 32 years), Walter is German, they live in France, work in Switzerland, and they have a son who speaks English and German at home but French at school. Talk about diversity!

Janice is a violist with the Basel symphony. We knew we had to get her together with Connie, another professional violist, who you may recall lives in Amsterdam with her husband Sape and has been featured in these updates a couple of times. Where better to spend an evening than the world-class concert hall, the Concertgebouw! No violas in this performance, though; we heard an evening of Brazilian jazz featuring legendary harmonica player Toots Thielemans who, at age 89, blew the audience away.

We had a wonderful time with Janice and Walter and we thank them for coming to see us! 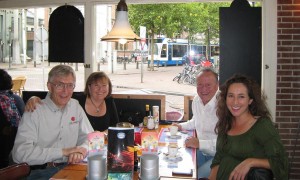 Harrison, Sharene, Randy and Kathy at the Pancake Corner

This morning we met Kathy and her boyfriend Randy for a breakfast. Randy is CEO of an IT company in California and is in Europe on business. It was interesting to hear “CEO-speak” again; we haven’t heard that very much since we started on this trip, but it’s something you never forget! Randy is an impressive guy and like most CEOs he juggles a lot of plates and was often interrupted by calls on his cell phone… another reminder that we are happy not to be that busy but we enjoy watching someone else do it so well.

We have known Kathy for about 10 years; she also owns a condo at Kihei Akahi on Maui. Kathy has her own vacation rental company, Maui Vision, so we have worked together over the years. She’s also an accomplished artist, so after breakfast they were off to the art museums! 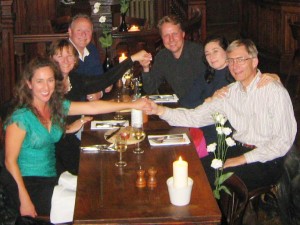 You know how annoying it is when you go to a romantic, charming, quiet restaurant and there is a group of people at a nearby table laughing loudly and having a great time? Well, that was us tonight! Thanks to Kathy and Randy, we had the opportunity to share a lovely dinner at a neighborhood restaurant and meet two of their friends who live here in Amsterdam.

Manouk and Tony both work in theater, television, and movies (Manouk being an actor, Tony a former actor now coach). Another “connection” on this amazing trip.

And that’s how it goes… people ask us how we know so many people in Europe, and it just happens organically. We thank Kathy and Randy for taking the time to visit and introduce us to interesting people, sharing their aloha half way across the world.

Wishing everyone a great week with lots of interesting connections.