Anne Frank and Her Diary 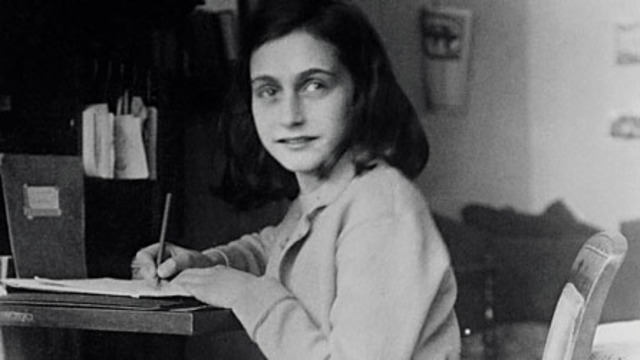 The Little Girl Who Touched The World 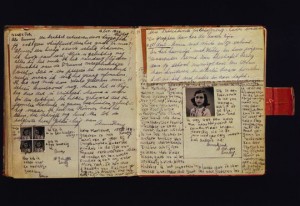 In her wildest dreams of being a writer, Anne Frank could never have imagined that her story would become one of the world’s most widely read books, translated into many languages, the subject of movies and plays, or that she would be named one of the 100 most influential people of the 20th century.

On Tuesday a couple of weeks ago, we went to buy tickets to visit the Anne Frank House here in Amsterdam where she went into hiding with her family. To our surprise, the first available tickets were at 7:15 pm the following Sunday! Just over a million people a year go through this house; for those without advance tickets, the queue is lined up around the block starting early in the day. The museum turns away many every day because it simply cannot handle the volume of people coming to see this historic place.

Probably everyone reading this knows that Anne Frank and her family hid in the attic annex of her father’s company to keep from being sent to concentration camps by the Germans who occupied the Netherlands (and much of Europe) in the 1940s. The Anne Frank Foundation has created a moving memorial not just to Anne and her family, but to all Holocaust victims. Spending a few hours in the house where they lived in secret for almost two years, without being able to go outside, open a window, or make any noise, gives you a very tiny taste of what they must have endured. In the end, of course, they were betrayed, arrested and deported, and all but Anne’s father died in concentration camps. Sadly, Anne and her sister both died just weeks before the camps were liberated by Allied troops.

Personally, we were pleased to wait our turn and gratified to see so many people interested in the Anne Frank story. She was a little girl who loved to write, wrote well, and had dreams of a better life. She never got a better life, but though her tragedy is only one among the millions of Holocaust victims, her story has touched and hopefully taught many, many millions since. 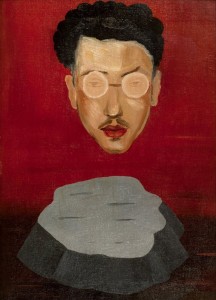 Painting by Victor Brauner from the JHM exhibition

We’re actually living in the old Jewish section of Amsterdam. Just a block away from our apartment is the Jewish Historical Museum, which we went through yesterday. Our last name may be Klein, but we’re not Jewish so we have a lot to learn! We were impressed by the extensive array of interactive exhibits and information about the history, culture and customs of Judaism, from Passover to circumcision and much, much more than we could assimilate in one visit.

We had our most fun at the temporary exhibition of Jewish avant-garde artists from Romania. The exhibition, From Dada to Surrealism, includes more than 70 works of art from the period 1910–1938 by several Romanian artists. A world war, economic boom and depression, communist and fascist revolutions; it was a fascinating but difficult time and place to be a Jewish artist, writer, poet, or musician. Very interesting and appealing styles that we had not seen before or known much about. Surrealist, abstract, and expressionistic works, picto-poetry, and personal variations on Constructivism — nothing was too radical for them. 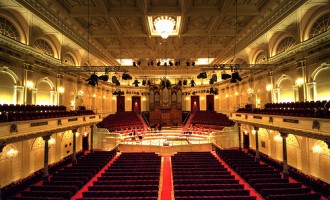 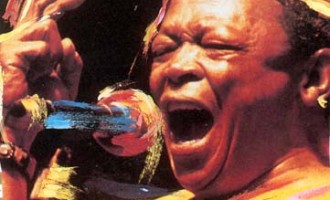 Following up on our great experiences at Symphony Hall in Boston, this week we got to hear a performance at the Concertgebouw, another of the world’s most renowned concert halls. The Concertgebouw is actually the second most visited concert hall (that must be true… we read it on Wikipedia). It was built in 1888 and just being inside is exciting enough! We were lucky to see Hugh Masekela (remember Grazing in the Grass?) perform there this week. We had actually seen him a few years ago in one of the least known concert halls in the world… the University of Hawaii at Hilo! We loved him both times; he puts on a fabulous, energetic show (how we hope we are as limber as he is when we get to be 72). We loved how he paid tribute to all the classical composers whose music has been played in this distinguished hall and how he felt very honored to share his music in this special place. Good music, great acoustics, a beautiful building and an appreciative audience — a very lovely evening! 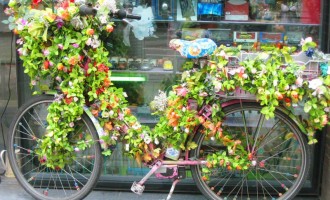 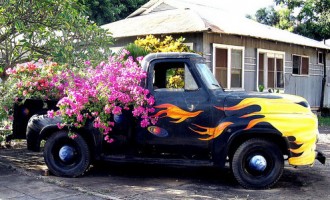 We may be living in Amsterdam, but we are still Hawaiians at Heart. No matter where we go, little things remind us of Hawaii. This flower-filled bike prompted our memory of an old truck on Kauai (some of you probably remember seeing this down near Hanapepe).

We know there is beauty wherever you go. What there is NOT in Amsterdam, however, is Chinese dim sum for lunch, which we find very odd since there are dim sum restaurants. Dim sum is one of our favorite brunch or lunch foods and we have it whenever we can — one reason we have a condo right in Honolulu’s Chinatown. We’ve eaten dim sum all over the U.S. and Canada and it’s always been a late breakfast or lunch dish for the Chinese. If you get to a dim sum place after 2 pm they’re usually pretty much sold out. But the dim sum restaurants in Amsterdam don’t even open until 2 pm! We don’t get it and, well, we didn’t get it!

That’s it from Week 28. Wishing you all a good week and we’ll touch base next Sunday.