How Muzak Changed My Life 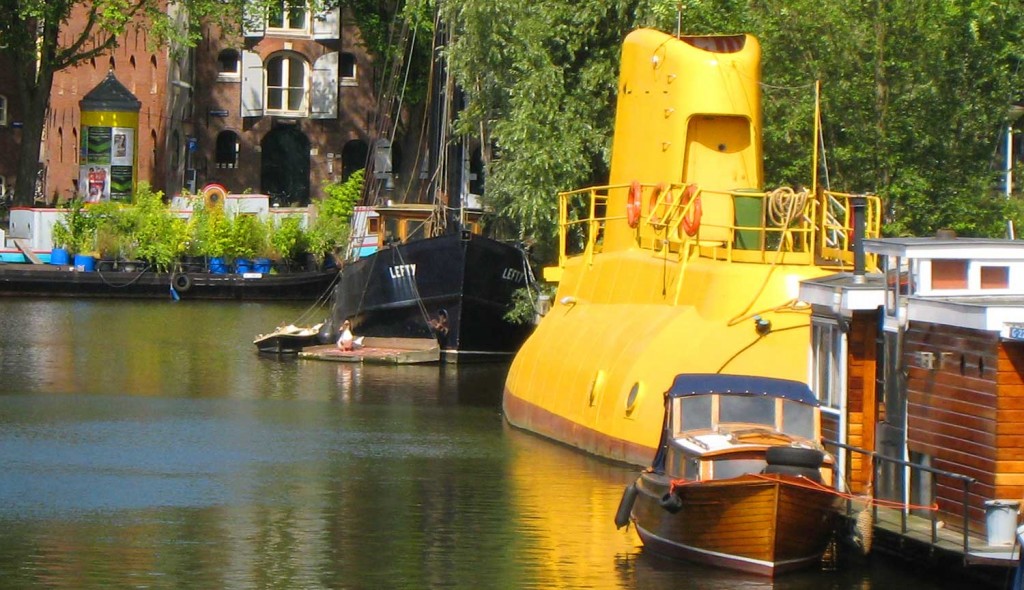 Yes, that is a YELLOW SUBMARINE! We spent last Sunday afternoon on an art walk to several open studios in the Western Islands, a part of Amsterdam that used to be warehouses and now is full of charming apartments, houseboats, and artists-in-residence. The art walk included a free canal boat tour, and in this city you just never know what you’ll see! The tour guide said the sub was formerly a floating brothel in Paris and was “asked” to leave; where else to go but Amsterdam? 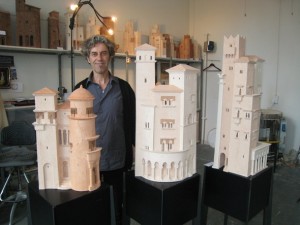 We saw a number of studios on the art walk and met some interesting artists, but our favorite on both counts was sculptor Arthur Meijer. He creates phenomenal terra cotta sculptures of real and fanciful Mediterranean houses. The tall walls have tiny real window openings that you can’t quite see inside, so they make you daydream about the kind of life that goes on in these old buildings. The word “unique” is often thrown about when it’s undeserved, but we’ve never seen anything like this!

Our goal when we set out on this adventure was to stay long enough in several places so that we could live like the locals, and so far in Seattle, Boston and Amsterdam we have felt the pulse of our neighborhoods and have become residents more than visitors.

Sharene: I got a bike this past week and I’m in heaven! The city really isn’t that big — more like a very large village — and since there are bike paths on almost every street, it’s a fantastic way to get around. It’s been almost three months since I drove a car, so hopefully I won’t lose that skill, but while in Amsterdam, I am doing what the locals do and riding my bike.

Harrison: I’m also doing what I would do if I lived here — working on websites! Even though we sold Hawaii Holiday Vacation Rentals last year, we still have a number of business websites, including MauiHotels.com, HonoluluTower.net, and several others. I enjoy this work, particularly if I have a nice view when I look up from the computer. Even though I never have enough time to get really good at it — so these sites are pretty basic and still a bit dated — at least now they all work properly and have current information, which may actually generate a little income!

There are so many things we love about Amsterdam. The city has 37 museums; so far, we’ve seen 12 of them and our goal is to see 36 of the 37 (we’ll probably skip the Torture Museum). We love the canals — 47 miles worth — and bridges… all 1,287 of them! We live on one of the canals and we watch tour boats and personal boats go by all day with people out enjoying this city. As we write this, boats are passing by our apartment with people waving. If it’s a nice day, the Dutch will be outside on the canal or having a coffee on their balcony. People here are happy! We have not run into one rude person. They enjoy life, they look healthy, and (thankfully for us and our indecipherable Dutch) they speak English well; even when they don’t, they are happy to try. We also love the streets. There are generally four lanes on the big streets and three on the smaller ones, but we don’t mean just for cars; besides the car lane there are almost always bike lanes, tram lanes, and/or bus lanes, and lots of space for pedestrians. The public transportation is superb; we rarely wait more than three or four minutes for a tram or bus. With the ease of public or bike transportation, there are just not that many cars, and we love that, too. 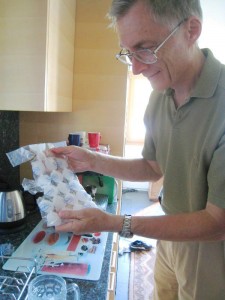 A few things about Amsterdam are different and we have learned to adapt. Ice (as in frozen water)… Europe is just not a continent that likes ice; their version of an “ice tray” is this flimsy plastic bag you fill up with water and then, when it freezes, you spend about 10 minutes extracting the little round cubes from the baggie. Wash cloths… no such thing here, they’re little mitts. Credit cards… it’s cash only here, or a Dutch debit card, thank you very much! Drinking water… just not a big deal here; you never see people walking around with water bottles, and if you go to a restaurant and want a glass of water, it’s usually 2 euros for a very small glass (and of course, no ice). Ice tea… you can find the sweetened kind from a bottle or can, but unsweetened, freshly brewed ice tea? Forget it. But these are all very minor inconveniences and such a small, small price to pay for having this wonderful experience.

Harrison: So how did Muzak change my life? You may remember from last week that Amsterdam dim sum restaurants open at 2 pm, so earlier this week we decided to have a dim sum dinner, which was accompanied by some of the worst background music I’ve ever heard: disgusting synthesized ’60s pop standards that sounded like instrumental versions of Barry Manilow on quaaludes! But as I was making some joke about Muzak, I realized: we’re here because of Muzak!

In 1982, I became Director of Radio Engineering for Westinghouse Broadcasting (now CBS) in New York City. Westinghouse had just acquired The Muzak Corporation and, since it was an audio service, they put me in charge of Muzak’s technical operations. Muzak may be a joke to many people, but it’s a worldwide operation with thousands of subscribers and a very large and complex music production and distribution system.

My first Muzak task was to fly to Switzerland and check out an exotic new music playback system made by the Swiss audio company Studer Revox. It was my first European trip and I knew no one. The managers at Studer Revox introduced me to the newly appointed president of their American division, a young man about my age named Hans Batschelet. Hans graciously invited me to dinner with his wife, Sarah. That was the beginning of my life-long friendship with the Batschelets that endures to this day.

And so because of Muzak, I have my love for Europe and some of my closest friends, so I shouldn’t complain too much about even the worst background music!

And so also because of Muzak, we are very excited that Hans and Sarah’s twins, Isabel and Hallie, have just arrived and will be with us this week. We can’t wait to share this wonderful city with them.

Hope everyone is having a wonderful summer!

A hui hou and tot ziens!Sharene and Harrison