We got lucky again! Sarah’s oldest daughter (and Isabel and Hallie’s sister) Amelia hopped a train in Paris (where she was attending a conference) and 3-1/2 hours later landed on our doorstep in Amsterdam. We got to keep her for six days and since, in addition to full-time university studies, she is Managing Editor for the European Heart Journal, we figured she ought to be able to polish off this week’s update without breaking a sweat! She said, “Sure!” and so we have a guest author for this edition. Probably a good thing because all we would do is blabber on about how smart, interesting, beautiful and wonderful she is. So here is Week 31 from a different perspective! 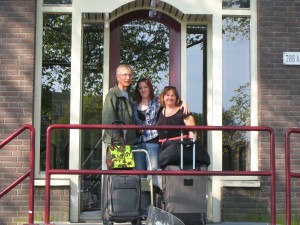 Harrison, Amelia and Sharene moving into the new apartment on the Amstel canal.

You know you have made it home when you are greeted on the train tracks at Centraal Station with open arms by Harrison and walk in the doors of a stylish Amsterdam residence to the smell of a delicious meal cooked by Sharene. This happened to me on Wednesday evening of this past week. The days since have been filled with cultural highlights galore, excellent food (all Sharene’s doing), various adventures involving bikes, a surprise visit, helping Sharene and Harrison move to a new apartment (see their view at the top of the page), and lots of laughter and good conversation. 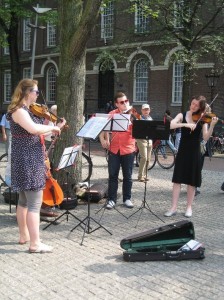 One of the cultural (and very unexpected) highlights of this week was a long morning spent at the Dutch Resistance Museum, where we learned about how the Dutch dealt with the Nazi occupation during World War II. This prompted the discussion of whether we might have taken part in the movement had we lived during this era, a question that will go unanswered. Other highlights included the Jewish Historical Museum, the Amsterdam Museum, and the Stedelijk Museum of Modern Art. In between all this cultural input we heard lovely street music (including the string quartet at left), enjoyed delightful park picnics, and discussed family history, how to make chocolate chip cookies without chocolate chips (hard to find in Europe), and politics. 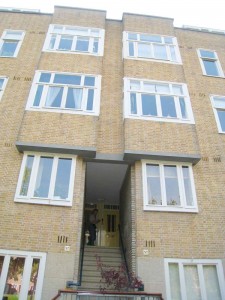 The Frank family’s pre-occupation apartment on the Merwedeplein.

Warm and dry weather has been a bit of an unusual occurrence so far during Harrison and Sharene’s weeks as residents of Amsterdam, so the two days of blue sky and sun were a true treat. Attempting to enjoy this good weather to the fullest, we rented bicycles and Harrison navigated us through the city as if he had been cruising along these canals for years.

We made one very memorable stop in front of the apartment complex where Anne Frank grew up — a very unassuming building overlooking a small park where she played. (This is not a tourist stop; finding this building takes a little research.) Knowing so much about her last years spent behind the infamous hinged bookcase, it was very moving to recall the years during which she lived a carefree life.

The big surprise of the week came after that long day of biking, when my dear husband Phil and his sister Stephanie suddenly popped out of the woodwork at a local cafe to spend two days with us in Amsterdam. This being Stephi’s first visit to this magical city (and I am not referring to any mushrooms here), we spent our first evening giving her a little tour. Our group of five enjoyed the second bike ride of the week, which was on canal bikes. We certainly didn’t break any speed records, but being on the canals allowed for a whole new perspective and the exercise made us feel better about the “Frietjes” (Dutch french fries) we enjoyed for lunch and the delicious Tibetan family-style dinner we had on Phil and Stephi’s last night here. 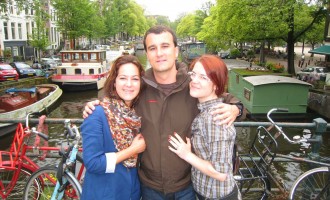 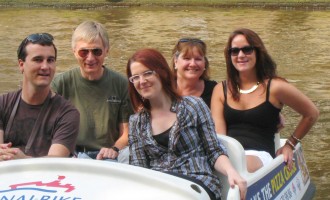 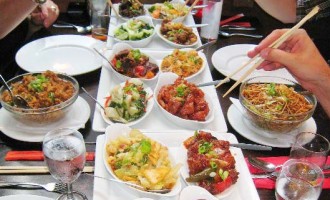 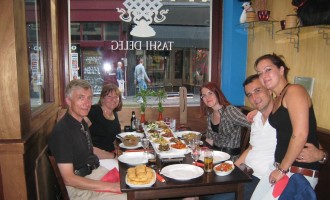 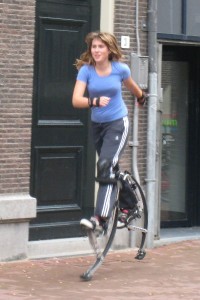 Powerbocking, a sport we will probably not be trying anytime soon…

The new discovery of the week for Sharene has been Powerbocking — running and jumping on spring-loaded stilts — which she saw a girl doing on a small plaza. Harrison later found a YouTube video that takes the sport to an amazing level.

In turn, my discovery of the week is the fact that Sharene used to be a member of a “Water Garden Club” on the Big Island. This I learned during our trip to the Botanical Gardens in Amsterdam, where I also learned that it is ludicrous to visit botanical gardens with someone who comes from a place that calls itself the “Orchid Island”. 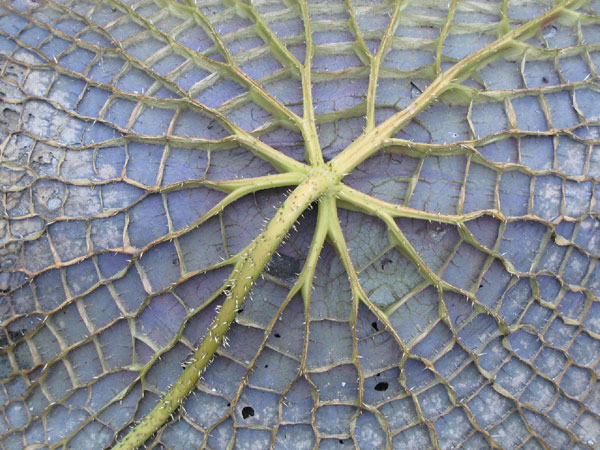 The Botanical Gardens’ saving grace: the back of a Victoria cruziana (one big lily)

While I am gently trying to bring this week to a close in writing on the couch of Sharene and Harrison’s new apartment at the intersection of the Amstel and Prinsengracht canals, I have just been introduced to yet another novelty of Amsterdam. A boat filled with men, fittingly labeled “DGIBs” (drunk guys in boats) by Harrison, floating down the Prinsengracht, singing at the top of their lungs completely off-tune. The Swiss in me immediately wonders whether there are any restrictions to operating a boat under the influence.

I remember reading in one of the newsletters that Harrison and Sharene chose Amsterdam due to the fact that it was one of “Europe’s unique and most fascinating cities”. It has been a very special privilege to further discover this place with two of the most unique and fascinating people in my life, and I feel lucky to have two more days to go. Thank you for everything!