Many years ago when we owned Bed & Breakfast International, we remember a telephone conversation (no Internet back then!) with European guests who were coming to visit San Francisco. We proudly told them we had a charming turn-of-the-century Victorian available, to which they replied, “Lovely! Which century?”

Well, now we truly understand that they weren’t kidding. We have been in three Italian cities this past week, and they aren’t just old, they are ancient cities with ruins, buildings, artwork and sculptures dating back thousands of years. It’s mindboggling to see such magnificent and often gigantic structures built by master craftsmen. Then, there is the art inside! Paintings, marble and granite sculptures, and fantastic painted ceilings. And all created to hold up over centuries… a far cry from the “throwaway” culture we live in today. 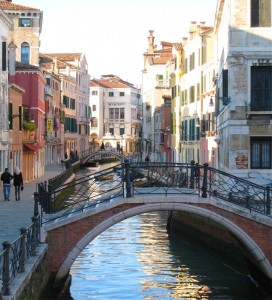 The roads are waterways, the streets are alleyways, the cars are boats and gondolas, and the buses are boats called vaporettos that pull up to the dock to take commuters, locals, and visitors where they need to go.

Our hotel, Hotel Al Duca di Venezia, was fantastic and we highly recommend it! We took a short walk from the hotel our first night to dinner at a small, family-owned Italian (what else?) restaurant. Watching the people who worked there and locals who came in was like watching a scene out of the movie The Godfather. Attention all casting agents: just have a cappuccino here and you will have all the characters you need for your next project! Another thing about restaurants here, if you don’t order vino with your meal, they look at you suspiciously…

Of course we’ve seen Venice many times in movies, but nothing can compare to the real thing. The smartly dressed gondoliers like the one at the top of the page really do stand up and maneuver these boats by oar-power alone along canals large and small.

How they built this city not on but in the water, we can’t figure. Sure, we read about how they did it, but we are still amazed it hasn’t completely disintegrated after hundreds of years in salt water. We had a pool that needed to be replastered after only 10 years of fresh water! 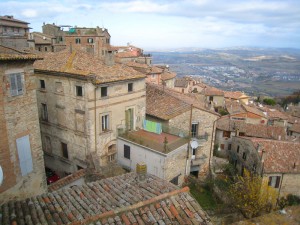 View from our room at the San Lorenzo Tre

So, how’s THAT for old? According to recorded legend, Todi was first built by Hercules way back in 1330 BC. We think our hotel was built not long after that! But we loved it, and if you ever get to Todi and want something different from a Holiday Inn (and rated #1 by TripAdvisor) check out the Residenza D’Epoca San Lorenzo Tre. The charming town of Todi is set way up on a hill overlooking one of the valleys in Umbria. It was built as a medieval fortress complete with several magnificent cathedrals and a busy town square.

Keith and Robin were our main reasons for a diversion to Todi. They also left Hawaii about the same time we did but decided to travel for two years, mainly in Europe. A tiny rural Umbrian village near Todi has been their home for the last few months, but they are off this week for sunnier weather in Spain. We have been following each other’s adventures along the way so it was fun to meet in person. And we happened to pick the evening of Immacolata Concezione (Immaculate Conception), a major Italian holiday, when they lit the huge Christmas tree in the Todi town square! 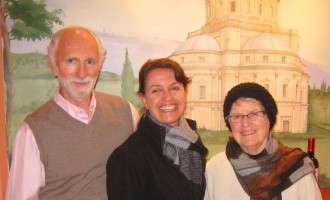 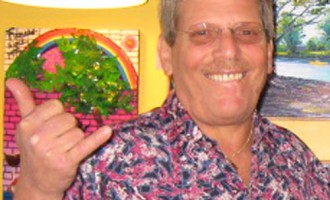 We had a very nice dinner with Keith, Robin, and Robin’s mother who was visiting, and we toasted our mutual friend, Luigi, who introduced us. Those of you who have been following our travels since the beginning might remember that Luigi was our friend from Hilo who owned our favorite restaurant there. He passed away suddenly and much too soon last February just after we left the Big Island. The four of us all had hoped he would come visit while we were on our mutual trips. Aloha and arrivederci, Luigi.

ROMA!! Two and A Half Thousand Years of History! 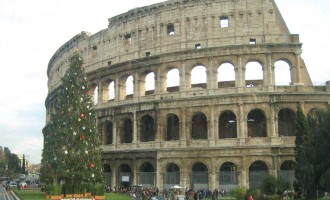 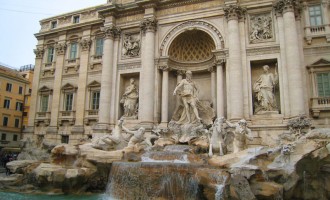 Rome is the 11th-most-visited city in the world, 3rd-most-visited in the European Union, and the most popular tourist attraction in Italy. We cannot even begin to imagine the crowds in the summer, because we think all 4.2-million visitors are here this week!

When you are a city with the Vatican, the Colosseum, fountains (including the famous Trevi Fountain above) and a history no others can beat, you expect it to be crowded. But even for us — two big city people — it’s just a bit too much. However, being here and seeing these places that were created so long ago is humbling and we know of no other place on our planet to see art displayed as it is here in Rome. We also have had fun listening to groups of 3-4 Italians in animated rapid-fire discussions — all talking at the same time!

We’ve had a great week in Italy. We always manage to meet nice people, we ate some good Italian food, and we had mostly blue skies and temps in the 60s (that’s above 15 C) in early December; guess that’s another reason people LOVE Italy! We still have more to see in Rome and then it’s on to Florence and Tuscany.

A hui hou, ciao, and arrivederci!