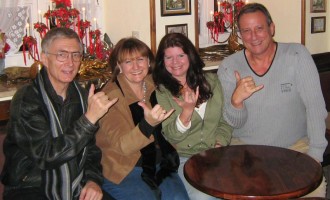 With Manu and Jeff 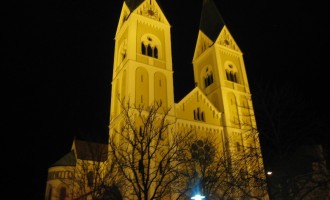 When we left Berlin last week, we headed south on the train into Bavaria to spend one night visiting some friends who relocated to Germany from the Big Island two years ago. Manu is originally from Germany, but this has been a new, exciting experience for Jeff. Manu just opened a brand new real estate office in the center of this charming old city and Jeff is hard at work learning fluent German. Too bad we don’t want to live in a sweet German city of about 45,000 people (with the feel of a village); if we did, we would be as captivated by Weiden as they have been. It was great to see them looking so happy, healthy, and excited about their future. When we asked Jeff if he ever missed the Big Island, he replied that the only thing he missed was his daughter; other than that, he is quite happy in Europe, “thank you very much!” 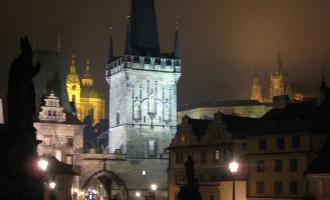 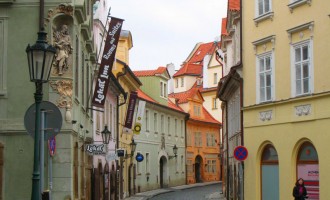 We had heard for years about the picturesque and amazing city of Prague… often ranked in the top five most beautiful cities worldwide. Still, after all we’ve seen this year and on previous European trips, we weren’t prepared to be so impressed by this incredible place with its castles, palaces, and other historic architecture as well as all its cultural and entertainment attractions. (Now we know the inspiration for Disneyland’s “Magic Kingdom” — the photo of Prague Castle and St. Vitus Cathedral at the top of the page is just one example.) Prague was almost overwhelming with so much to see, and of course being here during the holidays, we had the added beauty of Christmas lights, Christmas markets, and Christmas music everywhere.

For those we can convince to put Prague in their future travel plans, we highly recommend our hotel, the Hotel Pinot, one of those sweet old European hotels that is walking distance to Prague Castle, the Charles Bridge, and into the other old parts of the city. Thanks to our friends Tony and Hanne for the recommendation! 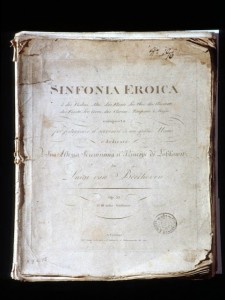 One of Beethoven’s original scores, on display at the Lobkowicz Palace Museum

We spent one afternoon at the Lobkowicz Palace, a privately owned building in the Prague Castle complex. The Palace, along with other large properties throughout the Czech Republic, is owned by the Lobkowicz family, who tell visitors to this museum a fascinating real-life tale about the six-hundred-year history of the Lobkowiczes, including the dramatic story of how the family lost everything twice and got it back — twice. The properties and contents are now managed by 50-year-old William Lobkowicz, who was born and raised in Boston. In 1989, he moved to Prague to begin reclaiming his family properties that were taken from them first by the Nazis, then by the communists. It’s an amazing history. Some of their most valuable and prized treasures are original scores and manuscripts by Beethoven and Mozart, including Beethoven’s 4th and 5th symphonies and Mozart’s re-orchestration of Handel’s Messiah, on display in the museum. Seeing these originals with the composers’ own handwriting took Harrison’s breath away! 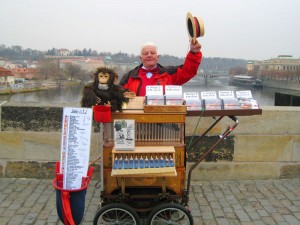 Music vendor on the Charles Bridge

Prague is a city for walking and we were so fortunate to have several days of blue skies… it was cold but clear. The historic Charles Bridge connects both sides of the city and walking across the river is magical. The bridge has towers at both ends and many vendors (including the man with the monkey!) to entertain you as you stroll across and admire the views in every direction. As usual, we took in some interesting events, heard some great music, and met some wonderful people during our time here — thanks, Carolina, for a lovely walk and more!

Our advice: Put this one on your list of places to visit! Five days wasn’t nearly enough time to see it all so we know we’ll be back.

However, unlike many of the beautiful places we have visited this year, Prague is one where we didn’t immediately say, “We could live here!” That’s because we are chagrined to admit that we would never be able to learn the Czech language… it’s pretty to listen to but impossible in every other way! We would like to say “thanks for a great time” in Czech, but this is how you would say it:

And we thought humuhumunukunukuapuaa was a mouthful! 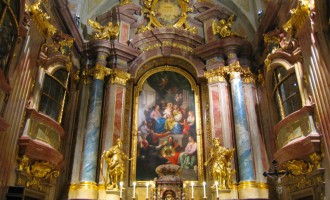 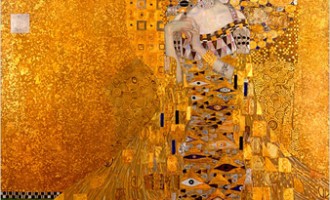 We ended our week in Vienna, another city on architectural steroids. We have been to Vienna before so this time only came for the weekend and could not do it justice, but we jammed as much as we could into our one full day here.

We went to a Christmas concert Saturday evening at St. Anna’s Church and today we went to three museums and ferreted out all the Klimt artwork we could find. At two of the museums with unbelievable collections of art work (the Kunsthistorisches Museum and Belvedere Palace), we couldn’t decide which was more magnificent, the art or the buildings!

Seems there is one surprise after another for us at every stop. We have another interesting week ahead of us in three very different places, but only one country… to give you a hint, we will leave you with this:

Ciao, and a hui hou!Sharene and Harrison