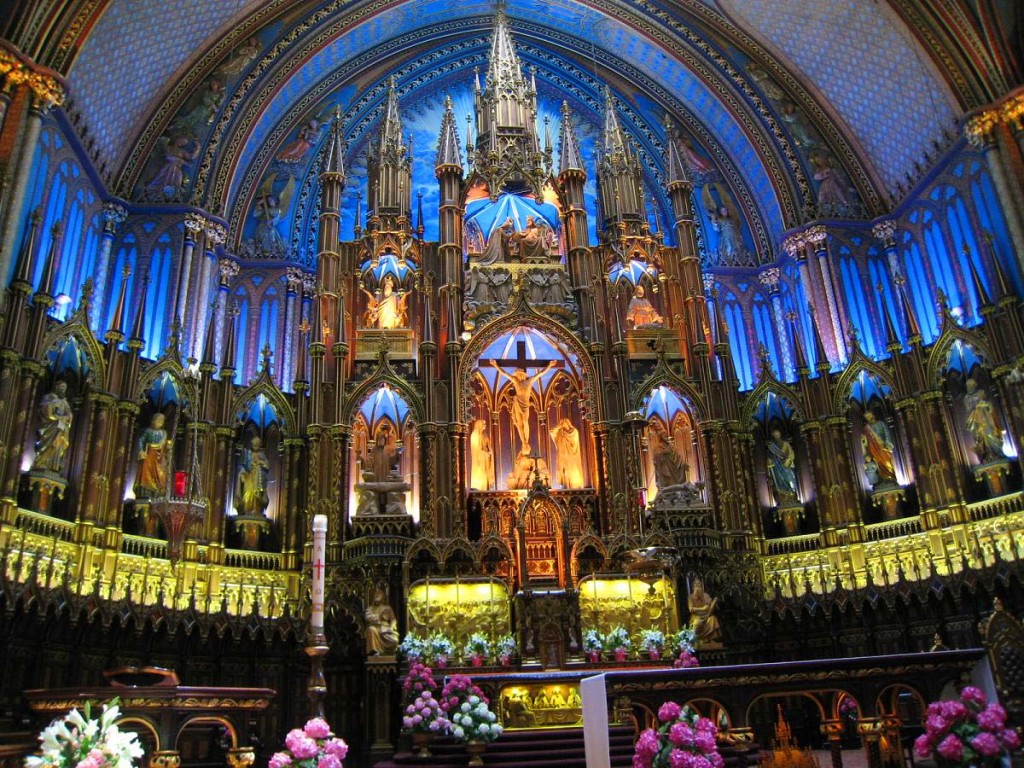 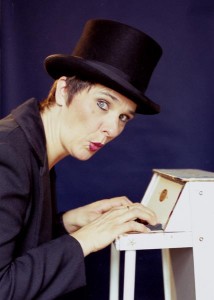 We have had pretty good luck timing our cross-country trip to see friends and events along the way, and during our stop in Montreal we had hoped to visit our friend, brilliant pianist and unique personality, the Queen of Ragtime, Mimi Blais. Unfortunately, Mimi was performing in Missouri this week, not far from where we passed a couple of weeks ago, so we missed hearing her play and we missed her in Montreal. But we got the next best thing: she graciously invited us to stay in her apartment while she was away. Seems we find ALOHA wherever we go!

Montreal has all the attributes of a big North American city with the charm of France. The combination of buses and subways got us all around town quickly and cheaply. Montreal also has a hi-tech bike rental system, BIXI, that lets you rent a bike at dozens of BIXI stations around the city, use it for as long as you need, and drop it off at the same or any other BIXI station. The automated stations keep track of your time and charge your credit card only for the time you use. We took BIXI bikes for a ride from Le Vieux-Port (the old port area downtown along the St. Lawrence River) to St. Helen’s Island, site of the 1967 World’s Fair, and back across another bridge to a different section of town without having to worry about getting our bikes back.

In the Old City, the interior of the Notre-Dame Basilica (photo at the top of the page) blew us away. The photo shows just one part of this amazing building. There’s also a separate chapel with an astonishing bronze altarpiece. We haven’t been to the Vatican, but this has to be the most impressive church we have seen, even topping our memories of Notre Dame in Paris. The Catholics sure did know how to find incredibly talented craftsmen. 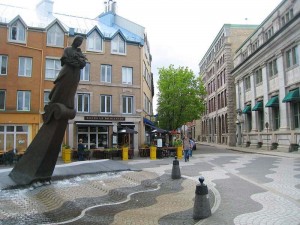 Quebec City has lots of charming cafes; we had a fantastic lunch at Bistro Le Brigantin.

Montreal may have the charm of France, but Quebec City has the charisma of Paris! The city is one of the oldest in North America — some of the buildings in the old section date back to 1600 — and drips with European charm. Unlike Montreal, not as many people speak English in Quebec City. We dallied three days here, wandering around and marveling at the architecture, museums and fountains, listening to street musicians, shopping, and then sitting at a sidewalk cafe and having a coffee or gelato. 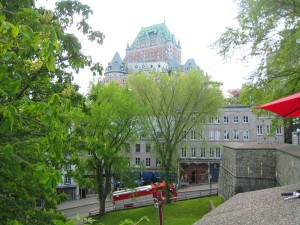 Looking at the Fairmont Chateau Frontenac Hotel from the lower part of the old city.

Inside the old “walled city” we certainly got a taste of what we will experience on the European part of our trip. Between the setting and everyone speaking French, it’s like being in France without the jet lag. And outside the historic section lies a large metropolitan city in a picturesque setting next to the majestic St. Lawrence River, with fantastic parks and a spectacular waterfall, Montmorency Falls. Charm, convenience, and green space, what more can anyone ask for in a city? Quebec City is Sharene’s new favorite! 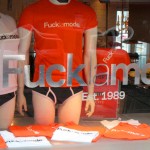 We aren’t easily offended by coarse language but we had to take a second look at this window display on a main street in downtown Quebec City of what appears to be a trendy new line of fashion. Perhaps the F word means something different in French? Somehow we can’t see this brand establishing itself at your local Sears or Walmart! Ah the adventures of traveling to new and exotic places! 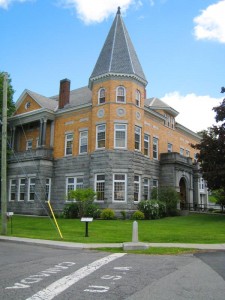 Harrison likes to seek out geographical oddities when he travels. On a visit to Vancouver BC several years ago, we drove to Point Roberts, Washington, which is part of the United States but the only road in and out goes through Canada.

So as we approached the international border between Quebec and Vermont, Harrison remembered hearing of a town with buildings that straddled the border. One house has its living room in the US and its kitchen in Canada! The town is Derby Line, Vermont, and we visited the Haskell Free Library and Opera House that indeed is bi-country. There is literally a black line on the floor inside that divides the building between the two countries.

It’s possible (but prohibited) to drive across the border at this unguarded intersection. Locals told us they walk back and forth all the time and we did, too. How civil. 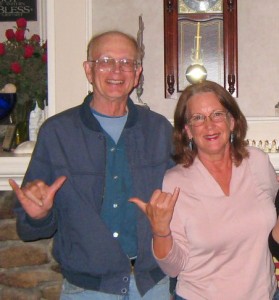 Once we came back to the good ol’ USA, we drove through some more incredibly picturesque territory… this time in Vermont and New Hampshire. The green rolling hills and trees were just stunning and we had lots of sunshine (yea!).

As we write this we are on beautiful, sunny Cape Cod, Massachusetts, visiting friends from Puna, Hawaii! We are staying with Richard and Ann who spend summers at their quintessential Cape Cod “cottage” across from Nauset Bay, one of the prettiest areas of the Cape. These two have spent the last two years renovating and adding on so now this “cottage” is a summer rental that sleeps 10! Plus they have their own house on this bay view lot. So we are 6000 miles away and, once again, sharing good times and lots of aloha with dear friends from Hawaii. 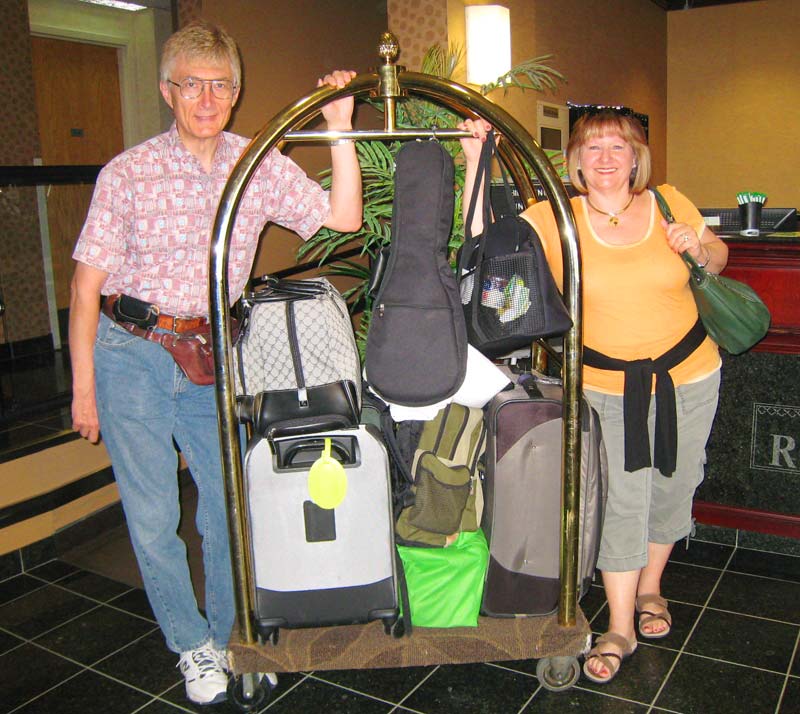 Two countries, four provinces, 15 states, and 22 beds, lugging all the luggage above in and out of hotels and homes of friends and family!

So here our cross-country road trip ends. Tomorrow we land in Boston for a full month! We found a great waterfront apartment in a historic building on the North End and we’ll spend the next month exploring Boston and preparing for our time in Europe. We’re looking forward to one place and one bed for the next 30 days.

Thanks for coming along with us on our cross-country trip; we’ve had a lot of fun and appreciate all the wonderful comments from everyone along the way.

Until next week,A hui hou!Sharene and Harrison