Here it is the end of May and we can’t find any sun! But gray skies, a little rain and one evening of being chased back to our hotel because of a scary, windy rainstorm didn’t keep us from having a good time in Ohio, upstate New York, and a quick trip into Canada to see Niagara Falls. 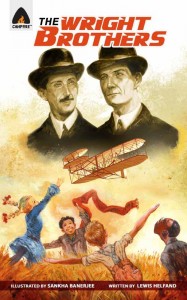 First stop this week was Dayton, Ohio, home of the Wright Brothers and the birthplace of aviation, where every self-respecting pilot has to visit the Aviation Trail. Harrison toured the Wright Cycle Company, where Wilbur and Orville invented the airplane, Carillon Historical Park with the original 1905 Wright Flyer III, and Huffman Prairie Flying Field, a quiet, peaceful, and still open field over 100 years later where the brothers developed and tested their early airplanes. Harrison was almost alone on those visits and found them very moving, which made the next stop quite a shock: the National Museum of the U.S. Air Force, the largest and oldest military aviation museum, with one million square feet of exhibits and throngs of visitors. That museum is focused on aircraft used in wars, which is understandable since it’s an Air Force museum and a lot of aviation development occurred during wartime, but it was a little disappointing to see so much interest in wartime air power when there was relatively little interest in the fascinating story of how flight occurred in the first place.

Cleveland is not exactly tourist destination numero uno. Perhaps best known until recently as the place where the Cuyahoga River was so polluted it caught fire (immortalized in the Randy Newman song Burn On), it shed that image by becoming home to the incredible Rock and Roll Hall of Fame Museum.

We both loved the museum although we have vastly different experience with music. Sharene has three musical favorites: the Beatles, Janis Joplin, and everything else! Harrison’s musical interests and knowledge run much deeper. But this is one first-class museum with lots of stuff at every level for both of us. Their current tribute to Women Who Rock showcases about 70 women from Bessie Smith and Ma Rainey, the first artists to record the blues, all the way up to the present with Queen Latifah and Lady Gaga. We loved how they featured so many early black musicians and gave them the attention and credit they deserve for being the catalysts of rock and roll. (Blues legend Robert Johnson was one of the museum’s first inductees.) Lots of videos, costumes (including Michael Jackson’s sequined glove), listening booths, and a wonderful tribute to Alan Freed, the Cleveland DJ and promoter who coined the term “Rock and Roll.” 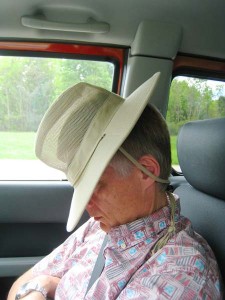 High-energy HK celebrating his birthday on the drive from Ohio to Buffalo!

After Cleveland we headed to another tourist mecca — Buffalo, New York — to see Alan. Alan was one of Harrison’s closest friends at the MIT radio station and Harrison later worked with Alan to build his first recording studio. Alan (the ultimate Buffalo Booster!) gave us a grand tour of Buffalo and took us across the border to see Niagara Falls. It was gray and misty and could have been a perfect setting for a murder mystery with the fog and steam rolling across the roads. As you can see from the top photo, that is one huge waterfall and impressive no matter the weather. 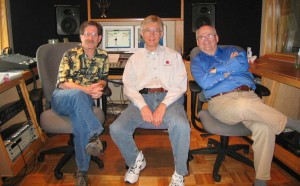 Kim, Harrison, and Alan at the Chameleon studios.

The following day Harrison toured Alan’s current studio, Chameleon Communications, and said hello to Kim. Alan and Kim have been business partners since Harrison worked with them in 1973. That’s one impressive partnership!

More fun than Niagara was ComedySportz the next night, a fast-paced improvisational comedy show played with two teams. Alan is a long-time performer in this high energy show. (Coincidentally, our friend Margie is a performer in the Portland, Oregon, ComedySportz, but we didn’t have a chance to see her perform when we visited Portland.) The show requires quick feet and an even quicker mind. We laughed the entire show. ComedySportz plays in many cities nationwide and in the UK and Germany, so if you have one in your area… go! Thanks, Alan, for a great time in Buffalo!

To see everything and everybody on our drive across the US, we have driven fast between destinations, stuck to major highways, and booked cookie-cutter hotels between our stays with friends and relatives. We saw lots of beautiful scenery, but Interstates bypass most towns, particularly the small ones, so you miss a lot of detail. We decided to do it differently on our drive across upstate New York from Buffalo toward Montreal this weekend. We headed to the south shore of Lake Ontario and followed the scenic Seaway Trail all the way to the Thousand Islands. Along the way we crossed the famous Erie Canal, saw the house where Sharene’s grandparents lived in Rochester, and passed through town after charming town. 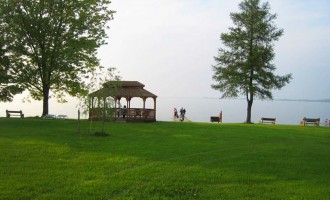 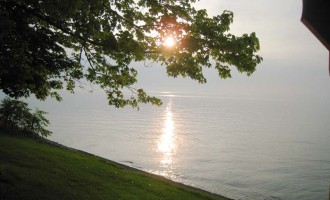 For the first time on the trip we had not made advance hotel reservations, but we found a vacancy at The Willows on the Lake, a cute little lakeside resort in Henderson Harbor owned and operated by a couple who used to live in Mukilteo, Washington, where attentive readers will recall we visited James and Judy just after we left Seattle. We had an unexpectedly great meal (including perfectly prepared walleye, the favorite fish of Harrison and every other Minnesota native) at nearby Ryan’s Lookout. We watched the hazy sunset from the lakefront gazebo in front of our cabin. After all the spectacular territory we’ve seen on this trip, we didn’t expect much from upstate New York — perhaps that’s why the day turned out to be such a sublime pleasure. 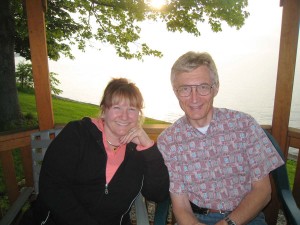 We’ve landed in Montreal today, still gray with a chance of thunderstorms… but hey, if we wanted guaranteed sunshine we would have stayed in Hawaii. So with raincoats and umbrellas in hand, we’ll go forth and explore this world-class city.

Until next week, a hui hou!
Sharene and Harrison