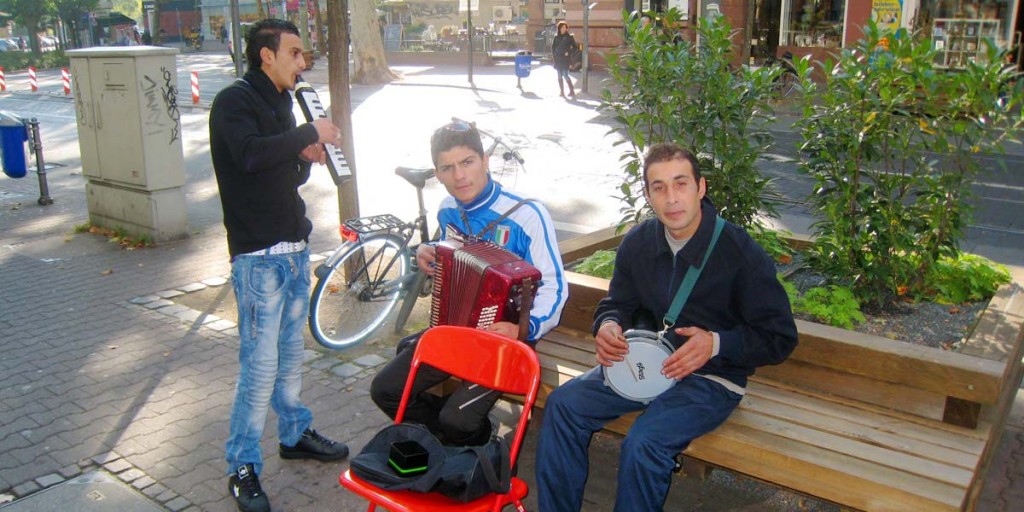 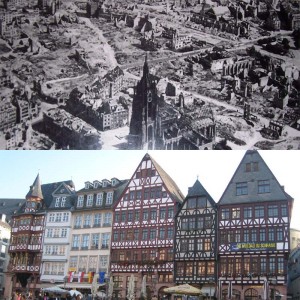 For a city known more for its commerce and finance than for its culture, Frankfurt turned out to be more appealing than we expected so we stayed on for a few extra days. Since we had such great fall weather, we took the intensive 4-hour Frankfurt on Foot Walking Tour and got a thorough introduction to the place. When you look at the city today, it’s hard to imagine how it looked after World War II when bombing almost totally destroyed it. The top photo on the right shows what little was left of the city center in 1945. Despite that destruction, the bottom photo on the right shows buildings in the town square that look old. That’s because they were built to look that way… in about 1980! 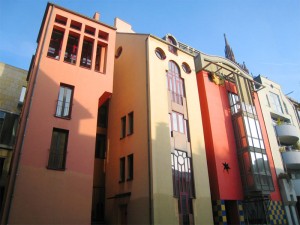 Since much of the city had to be rebuilt, Frankfurt had the opportunity to experiment with architecture. A lot of ugly buildings sprouted up in the 1960s and ’70s, and our tour guide pointed out several large construction projects where those buildings have already been torn down! We did see a few examples of interesting modern architecture that seemed to work. One street had houses built as part of an architectural design competition to create a residential area with traditional tall, narrow buildings but in a modern form. 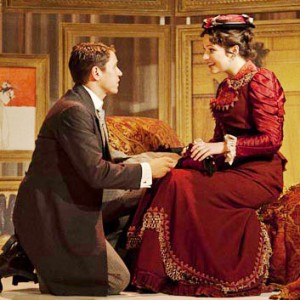 Jack proposing to Gwendolyn, who looks just like our dear friend Maggie!

For entertainment, Frankfurt has its share of street musicians like the group from Romania at the top of the page. We also discovered that the city has the largest English theatre on the continent, and we happened to arrive during the final week of Oscar Wilde’s The Importance of Being Earnest. It’s one of our favorites and we’ve seen it quite a few times over the years, but we have to say that this was probably the best performance of them all. The cast all came from England and delivered Wilde’s witty dialog with perfect timing and impeccable native British accents. The clever staging and lighting, elegant period costumes, and just the right amount of music made for a thoroughly enjoyable evening. And all just a 10-minute subway ride from our apartment!

We talked last week about some of Frankfurt’s many museums. We saved perhaps the top museum for this week, the Senckenberg Natural History Museum. While not quite the tour-de-force of the Smithsonian or some of the world’s other top natural history museums, it has a wide variety of exhibits covering most of the current and historical natural world including a large collection of dinosaur bones, many of which came from the United States. 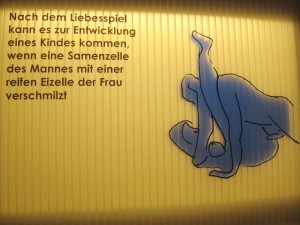 The text reads, “After loveplay can lead to the development of a child if the sperm cell of the man fuses with the fertile egg of the woman.”

We continue to be amused and impressed by the European approach to sex. Walking down one of the corridors at the Senckenberg, we came to an exhibit showing the development of a human embryo. The first display panel (at right) introduced the subject in the usual direct, matter-of-fact European style. We can’t imagine this (particularly the sketch) at an American museum, but as we looked through the exhibit, throngs of Frankfurt grade-schoolers on a field trip passed by without so much as a giggle. 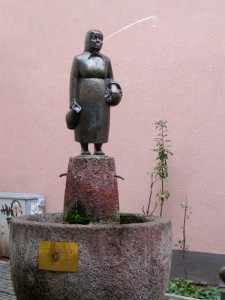 Like most European cities, Frankfurt has its share of cute neighborhoods. Our favorite is Sachsenhausen, just a short walk from the Frankfurt city center on the south shore of the River Main. Besides being home to many of Frankfurt’s museums, the old part of Sachsenhausen, which was largely spared in WWII bombing, still has its original narrow streets, buildings that are hundreds of years old, and small plazas with unique artwork such as the “spitting woman” statue at left. Every 15 seconds or so, the woman lets fly a stream of water that will soak the unsuspecting visitor. Perfectly timed for a Halloween “trick”!

With that we will close by saying Happy Halloween and of course, Aloha and A Hui Hou!